John B. Ford, a longtime leader in fundraising for top universities, has been named Vice Chancellor, University Development and Alumni Relations at UCSF. 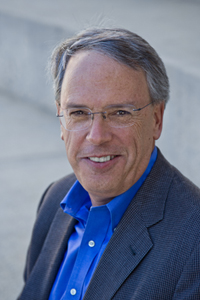 Ford brings more than 40 years of experience to the position, including 30 years at Stanford University, where he helped organize and successfully implement three campaigns with goals of more than $1 billion, including the first billion-dollar campaign in support of undergraduate education in the United States.

He began his Stanford career at the medical center, eventually leading development for the School of Medicine and Stanford University Hospital.  In addition, he directed the capital campaign to build Lucile Packard Children’s Hospital.

Ford launched his development career at the California Institute of Technology and subsequently served as a major gift officer at the University of Chicago. Most recently, he worked for the ClimateWorks Foundation in San Francisco, and currently serves as chair of the board of Marts & Lundy, a consulting firm to nonprofits based in New Jersey.

“I’m delighted that John is joining the leadership of UCSF,” said UCSF Chancellor Susan Desmond-Hellmann, MD, MPH. “He brings deep knowledge and experience in philanthropy to the position, and a proven ability to design and direct a comprehensive and dynamic development program for a world-renowned health sciences university and medical center.

“John is arriving at a fiscally challenging and exciting time in the history of UCSF,” she said. “Philanthropy plays an increasingly critical role in supporting our faculty and students and in strengthening the excellence of our world-class programs.  I’m confident that he has the ability to ensure that our mission is broadly understood and widely supported.”

The Chronicle of Philanthropy ranks UCSF as one of the top fundraising organizations in the United States.  For eight consecutive years, revenue from private support has surpassed the revenue UCSF receives from state appropriations.  In the fiscal year that ended June 30, 2012, UCSF received $329 million in private support. During the same fiscal year, state appropriations totaled 4 percent of UCSF’s $3.9 billion operating budget.

"I have known John for many years,” said William E. Oberndorf, the chair of the UCSF Foundation. “He brings years of development experience to UCSF. I very much look forward to working with him again.”

Ford said he looks forward to the challenge of the new job. “I welcome the opportunity to serve a university of UCSF’s stature, and to be part of the Chancellor’s dynamic leadership team,” he said. “Public universities fill a vital role in this country and I can’t think of a more critical moment to embrace UCSF’s mission of leadership in research, education,and patient care.”

Ford, who will report to the Chancellor, will begin his job September 17.  Jennifer Arnett, who joined UCSF in June 2010 as Senior Director, Corporate and Foundation Relations, has served as a senior leader in University Development and Alumni Relations.  Under Ford, Arnett will serve as Associate Vice Chancellor, University Development and Alumni Relations, pending approvals.

“UCSF is grateful for Jennifer Arnett’s leadership this past year as the development and alumni relations team advanced important UCSF initiatives,” Desmond-Hellmann said.  “John and I both recognize her considerable talents and are very pleased she will partner with John and remain an active member of the UCSF leadership team.”

As vice chancellor, Ford will oversee a team of 154 people and an operating budget of $30 million. Additionally, he will serve as vice president of the UCSF Foundation, which promotes the interests of UCSF and the UCSF Medical Center principally through fundraising efforts. The Foundation is governed by a 50-member Board of Directors, chaired by businessman and philanthropist William E. Oberndorf, and consisting of some of the Bay Area’s top business and civic leaders. Ford’s responsibilities include overseeing the Foundation’s $650 million endowment.

Ford will earn an annual base salary of $395,400.  In keeping with UC policy, additional compensation will include a hiring bonus, relocation allowance, participation in the Senior Management Supplemental Benefit Program and an executive automobile allowance.  He also will be eligible to participate in the UC Home Loan program.  Vice Chancellor Ford’s compensation received interim Regental approval. This position is funded entirely through non-State funds.