Scientists at the UCSF-affiliated Gladstone Institutes have discovered that environmental factors critically influence the growth of a type of stem cell — called an iPS cell — that is derived from adult skin cells. This discovery offers newfound understanding of how these cells form, while also advancing science closer to stem cell-based therapies to combat disease. 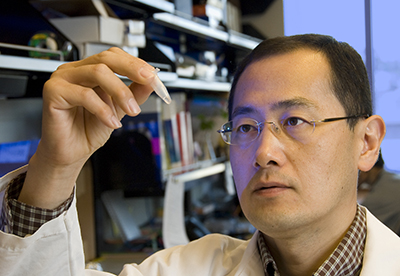 Researchers in the laboratory of Gladstone Senior Investigator Shinya Yamanaka, MD, PhD, a professor at UCSF, have for the first time shown that protein factors released by other cells affect the “reprogramming” of adult cells into stem cells known as induced pluripotent stem cells, or iPS cells. The scientists — who collaborated on this research with colleagues from UCSF — announce their findings today online in Cell Stem Cell.

In 2007, Yamanaka discovered a recipe of specific proteins to add to human skin cells as a way to induce them into becoming iPS cells — which act very much like embryonic stem cells. Many see iPS cell technology as a new platform for drug discovery and the study of disease fundamentals — while avoiding the ethical issues surrounding research involving embryonic stem cells. But questions remain about the most efficient way to cultivate iPS cells.

“We’ve reinforced our hypothesis that the cell’s environment is vital to the reprogramming process,” said Yamanaka, who did his postdoctoral studies at Gladstone in the 1990s, returning here in 2007 as a senior investigator. “We can now expand our understanding of cell development — and use iPS cells to model conditions such as Alzheimer’s and heart disease.”

Normally when researchers convert skin cells into iPS cells, the cells rest on a special layer of materials in a petri dish. The layer includes “feeder” cells that provide nutrients required for the iPS cells to grow and reproduce. In this study, performed at the Roddenberry Center for Stem Cell Biology & Medicine at Gladstone, scientists generated human iPS cell lines by using a method in which the feeder layer secretes a protein called LIF. Yamanaka, who invented this so-called “Kyoto” method, also directs the Center for iPS Cell Research and Application at Kyoto University.

The researchers then analyzed LIF’s importance in the growth of female iPS cells. Female iPS cells contain two copies of the X-chromosome, which is one of two sex chromosomes. While males carry one X and one Y-chromosome, females’ two X-chromosomes could result in a potentially toxic double dose of genes — except for a unique evolutionary mechanism whereby one of the two X’s is silenced in a process known as “X-inactivation.” This process, which occurs early during the development of the embryo, ensures that females, like males, have one functional copy of the X-chromosome in each cell. But exactly how X-inactivation happens is unknown.

To research this, Gladstone scientists generated female iPS cells on feeder layers without LIF and found that one of the X-chromosomes in each iPS cell remained silent. Those iPS cells that grew on a layer of cells with the LIF protein, however, grew with two activated X-chromosomes. Then, by taking a cell from a non-LIF cell layer and transferring it to a LIF-cell layer, the iPS cell’s inactive X-chromosome switched on and became even more like embryonic stem cells. These results are crucial for future studies of how iPS cells grow and mature. And because this iPS technology lets scientists create stem cells from patients with a specific disease, this new finding could lead to a far-superior human model for studying disease and testing new drugs.

“These results will make it possible to readily generate stable, double-active, higher-quality X-chromosome iPS cells, and study the process more closely,” said Gladstone Research Scientist Kiichiro Tomoda, PhD, who is the paper’s lead author”Our findings also reinforce work from other Gladstone scientists showing that the cell environment is critical to the reprogramming process.”

Other scientists who participated in this research at Gladstone include Kirsten Eilertson, PhD, Mark White, Salma Sami, Bruce Conklin, MD and Deepak Srivastava, MD. Funding came from a variety of sources, including the California Institute for Regenerative Medicine, the National Institutes of Health, the Roddenberry Foundation and the L.K. Whittier Foundation.