Scientists at the UCSF-affiliated Gladstone Institutes have for the first time transformed skin cells — with a single genetic factor — into cells that develop on their own into an interconnected, functional network of brain cells.

The research offers new hope in the fight against many neurological conditions because scientists expect that such a transformation — or reprogramming — of cells may lead to better models for testing drugs for devastating neurodegenerative conditions such as Alzheimer’s disease. 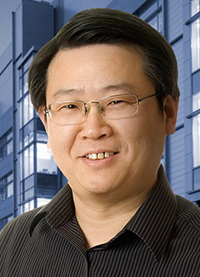 This research comes at a time of renewed focus on Alzheimer’s disease, which currently afflicts 5.4 million people in the United States alone — a figure expected to nearly triple by 2050. Yet thereare no approved medications to prevent or reverse the progression of this debilitating disease.

“Many drug candidates — especially those developed for neurodegenerative diseases — fail in clinical trials because current models don’t accurately predict the drug’s effects on the human brain,” said Huang, who is also an associate professor of neurology at UCSF. “Human neurons — derived from reengineered skin cells — could help assess the efficacy and safety of these drugs, thereby reducing risks and resources associated with human trials.”

Also known as iPS cells, these cells can become virtually any cell type in the human body — just like embryonic stem cells. Then last year, Gladstone Senior Investigator Sheng Ding, PhD, announced that he had used a combination of small molecules and genetic factors to transform skin cells directly into neural stem cells. Today, Huang takes a new tack by using one genetic factor — Sox2 — to directly reprogram one cell type into another without reverting to the pluripotent state.

Avoiding the pluripotent state as Drs. Ding and Huang have done is one approach to avoiding the potential danger that “rogue” iPS cells might develop into a tumor if used to replace or repair damaged organs or tissue.

“We wanted to see whether these newly generated neurons could result in tumor growth after transplanting them into mouse brains,” said Karen Ring, UCSF Biomedical Sciences graduate student and the paper’s lead author. “Instead we saw the reprogrammed cells integrate into the mouse’s brain—and not a single tumor developed.”

This research has also revealed the precise role of Sox2 as a master regulator that controls the identity of neural stem cells. In the future, Huang and his team hope to identify similar regulators that guide the development of specific neural progenitors and subtypes of neurons in the brain.

“If we can pinpoint which genes control the development of each neuron type, we can generate them in the petri dish from a single sample of human skin cells,” said Huang. “We could then test drugs that affect different neuron types—such as those involved in Parkinson’s disease—helping us to put drug development for neurodegenerative diseases on the fast track.”

Others who participated in this research at Gladstone include Leslie Tong, Maureen Balestra, Robyn Javier, Yaisa Andrews-Zwilling, PhD, Gang Li, PhD, David Walker, William Zhang and Anatol Kreitzer, PhD. Funding came from a variety of sources including the California Institute for Regenerative Medicine, the National Institutes of Health, the National Science Foundation, the Tau Consortium, The Roddenberry Foundation and the S.D. Bechtel, Jr. Foundation.