A large, international team of researchers led by scientists at the University of California, San Francisco (UCSF) has identified the gene that causes a rare childhood neurological disorder called PKD/IC, or “paroxysmal kinesigenic dyskinesia with infantile convulsions,” a cause of epilepsy in babies and movement disorders in older children.

The study involved clinics in cities as far flung as Tokyo, New York, London and Istanbul and may improve the ability of doctors to diagnose PKD/IC, and it may shed light on other movement disorders, like Parkinson’s disease.

The culprit behind the disease turns out to be a mysterious gene found in the brain called PRRT2. Nobody knows what this gene does, and it bears little resemblance to anything else in the human genome. 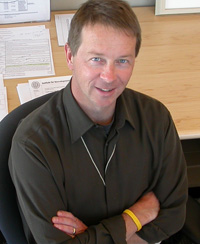 “This is both exciting and a little bit scary,” said Louis Ptacek, MD, who led the research. The John C. Coleman Distinguished Professor of Neurology at UCSF and a Howard Hughes Medical Institute Investigator, Ptacek is a professor in the Department of Neurology, which seeks to discover the causes of human nervous system disorders and improve treatment options for patients by applying state-of-the-art translational research methods and engaging in collaborations with colleagues around the globe.

Discovering the gene that causes PKD/IC will help researchers understand how the disease works. It gives doctors a potential new way of definitively diagnosing the disease by looking for genetic mutations in the gene. The work may also shed light on other conditions that are characterized by movement disorders, including possibly Parkinson’s disease.

“Understanding the underlying biology of this disease is absolutely going to help us understand movement disorders in general,” said Ptacek.

PKD/IC strikes infants with epileptic seizures that generally disappear within a year or two. However, the disease often reemerges later in childhood as a movement disorder in which children suffer sudden, startling, involuntary jerks when they start to move. Even thinking about moving is enough to cause some of these children to jerk involuntarily.

The disease is rare, and Ptacek estimates strikes about one out of every 100,000 people in the United States. At the same time, the disease is classified as “idiopathic” — which is just another way of saying we don’t really understand it, Ptacek said.

If you take an image of the brain by MRI, patients with the disease all look completely normal. There are no injuries, tumors or other obvious signs that account for the movements—as is often the case with movement disorders. Work with patients in the clinic had suggested a genetic cause, however.

“Sometimes we trace the family tree, and lo and behold, there is a history of it,” said Ptacek. In the last several years, he and his colleagues have developed a large cohort of patients whose families have a history of the disease.

The new research was based on a cohort of 103 such families that included one or more members with the disease. Genetic testing of these families led to the researchers to mutations in the PRRT2 gene, which cause the proteins the gene encodes to shorten or disappear entirely in the brain and spinal cord, where they normally reside.

One possible explanation for the resulting neurological symptoms, the researchers found, relates to a loss of neuronal regulation. When the genetic mutations cause the gene products to go missing, the nerve cells where they normally appear may become overly excited, firing too frequently or strongly and leading to the involuntary movements.