Scientists at the UCSF-affiliated Gladstone Institutes have identified a protein that kick–starts the response to low levels of oxygen, suggesting new lines of research relevant to a variety of potentially fatal disorders associated with diminished oxygen supply, including cancer, heart disease, stroke and other neurological conditions that affect millions of people worldwide. 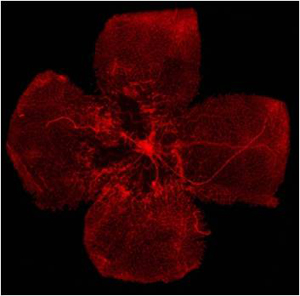 Blood vessels (shown in red) in a mouse retina that is missing the p75NTR protein. Black areas indicate a lack of blood vessels in the absence of p75NTR. Gladstone scientist Katerina Akassoglou’s lab found that p75NTR was critical for kick-starting increased blood vessel production during hypoxia.

In a paper being published today in Molecular Cell, the laboratory of Gladstone Associate Investigator Katerina Akassoglou, PhD, maps out the chain of events that take place during hypoxia. Hypoxia is a condition that can occur in people with diseases such as heart disease and stroke. It deprives tissues and organs of an adequate oxygen supply.

“This discovery provides a novel understanding of the steps by which cells normally respond to hypoxia, a fundamental biological process that is implicated in many medical conditions,” said Akassoglou, whose research at Gladstone — a leading and independent biomedical-research organization — investigates the mechanisms of inflammation and tissue repair in the brain.

The paper details how Akassoglou’s lab discovered the previously unknown biological function of a protein called p75NTR. When activated by hypoxia, p75NTR sets off the cascading series of events that results in increased blood-vessel production to replenish oxygen levels during disease.

Previous research had indicated that hypoxia triggers the activation of a protein called HIF1–alpha — an activation that ultimately leads to more blood vessels and an ensuing improvement in oxygen flow. There has been much interest among researchers in modifying levels of the HIF1– alpha protein to spur blood-vessel production in individuals with hypoxic conditions. But Akassoglou decided to take a different approach in her research.

By monitoring the responses of mice under hypoxic conditions, Akassoglou found that hypoxia first activated the p75NTR protein, which then activated HIF1-alpha and set everything in motion.

“What was most striking to us was what happened when we removed the gene that makes p75NTR,” said Natacha Le Moan, PhD, a Gladstone postdoctoral fellow and the first author of the paper. “By effectively silencing p75NTR, the mice’s response to hypoxia was impaired and blood-vessel production decreased.”

“Now that we’ve shown that p75NTR spurs the activation of HIF1-alpha and the production of blood vessels during hypoxia, we can move forward with exploring potential therapies,” said Akassoglou, who is also an associate professor of neurology at UCSF. In addition, Akassoglou is also an associate adjunct professor of pharmacology at the University of California, San Diego.

“Dr. Akassoglou’s trailblazing discovery could enable the development of pharmaceutical therapies for conditions that are caused or exacerbated by reduced oxygen levels,” added Lennart Mucke,MD, who directs neurological research at Gladstone.“This is important news for those who suffer from hypoxia-related illnesses such as heart disease, stroke and certain types of cancer.”

Other scientists who participated in this research at Gladstone include Natacha Le Moan, PhD, and Daniel Houslay. Collaborating scientists include Miles Houslay, PhD, and Frank Christian, PhD, at the University of Glasgow.Funding for this research came from a wide variety of sources, including the National Multiple Sclerosis Society and the National Institutes of Health’s National Institute of Neurologic Diseases and Stroke.

The Gladstone Institutes is an independent and nonprofit biomedical-research organization dedicated to accelerating the pace of scientific discovery and innovation to prevent illness and cure patients suffering from cardiovascular disease, neurological disease, or viral infections.