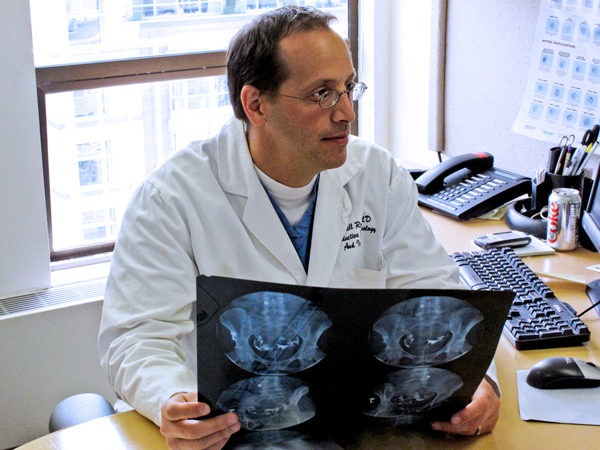 Mitchell Rosen, MD, director of the UCSF Fertility Preservation Center, hopes to offer women more strategic and personalized counseling on the effects of chemotherapy and fertility.

Current estimates of the impact of chemotherapy on women’s reproductive health are too low, according to a University of California, San Francisco (UCSF) study. The researchers say their analysis of the age-specific, long-term effects of chemotherapy provides new insights that will help patients and clinicians make more informed decisions about future reproductive options, such as egg harvesting.

Previous studies largely have focused on amenorrhea, or the lack of menstruation shortly after treatment, as the primary reproductive side effect of chemotherapy. In this analysis, the researchers also focused on longer-term, age-specific outcomes associated with chemotherapy, including infertility and early menopause. They also noted that the younger a woman is when diagnosed with cancer, the more likely she will experience early menopause.

“We found chemotherapy essentially narrows a woman’s reproductive window by causing a range of damage to the ovaries, even if her menses resume after chemotherapy,” said Mitchell Rosen, MD, senior author and assistant professor in the UCSF Department of Obstetrics, Gynecology and Reproductive Sciences.

Many of the women who responded to the survey had been told that as long as their periods came back, they would have no negative impact from treatment, he said.

“We currently make recommendations on preserving fertility based on limited data. These new findings, which also take into account cancer type and age, hopefully will enable us to offer more strategic and personalized counseling,” said Rosen, who also is director of the UCSF Fertility Preservation Center.

The study is available online in the journal Cancer.

A total of 1,041 women diagnosed with one of five targeted cancers between the ages of 18 and 40 years old responded, and 620 reported having been treated with only chemotherapy. The five cancer types – leukemia, Hodgkin’s disease, non-Hodgkin lymphoma, breast cancer and gastrointestinal cancers – were chosen because they are common non-gynecologic cancer groups that can be treated with systemic chemotherapy.

Approximately 120,000 women younger than age 50 develop cancer each year in the United States, according to statistics from the 2006 Surveillance, Epidemiology, and End Results (SEER), and several studies show that loss of reproductive potential after cancer treatment can negatively impact quality of life in young survivors.

While 7 percent of women across the United States report 12-month infertility according to the researchers, the rates of infertility in young cancer patients are unknown.

“We noted proportions of infertility among cancer survivors that appear considerably higher than those in the general United States population,” said Joseph Letourneau, MD, the study’s lead author. Letourneau was a medical student under Rosen when the research was conducted and now works as a resident physician in obstetrics and gynecology at the University of North Carolina. “When counseling patients, focusing solely on short-term outcomes like loss of menses may give women unrealistically low assessments of their risks, since they could experience infertility or early menopause years to decades after treatment.”

Rosen said that more research is needed since the retrospective study did not include specific patient characteristics such as genetics or variations in individual cancer treatments.

“Our analysis adds one more piece to the puzzle,” he said. “Doctors will continue to need to use their gestalt and understanding of a patient’s life to provide the best guidance.”