Scientists are making great strides in figuring out how the human brain – with its expansive cerebral cortex and corresponding capacity for higher thinking – became one of nature’s greatest wonders.

Insights about how the brain develops are leading to novel ideas about the causes of a range of brain disorders, and are raising hopes for the regeneration of tissue that is lost in diseases such as Alzheimer’s. At the center of this scientific ferment are new stem cell discoveries by researchers at UCSF. 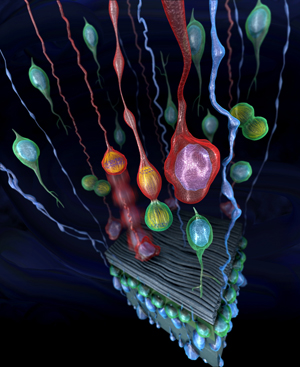 Stem cells in the human brain spin off neurons that populate the layers of the cerebral cortex and form vertical columns.

Like the phyllo dough crust in baklava and certain other Greek and Middle Eastern delicacies, the reptilian and mammalian cortices are made from thin layers. In reptiles, the cortex has three layers; in mammals, it has six. The entire cortex is about two millimeters thick.

While human brains have the same six cortical layers as brains from less well-equipped mammals, these sheets of cortical brain matter extend outward much farther in humans. Furthermore, in Homo sapiens and other primates, the cortex folds many times. The folding allows more neural circuitry to fit into the skull and gives the human brain its unique architecture and cauliflower-like appearance.

“The human brain has an enormously expanded surface area in the cerebral cortex,” says Arnold Kriegstein, MD, PhD, director of the Eli and Edythe Broad Center of Regeneration Medicine and Stem Cell Research at UCSF. Like the abundance of chips and transistors in a supercharged computer, all those added neurons form more circuits, allowing for more computation and more sophisticated kinds of processing. For us, the payoff is conscious thought, reasoning and language – and the wherewithal to build rich civilizations that span the globe.

Last year, Kriegstein’s laboratory team reported the identification of a long-elusive stem cell that we may have to thank for our success as a species. The stem cell appears to be responsible for the explosive growth of neurons that occurs in a part of the fetal primate brain known as the outer subventricular zone (OSVZ). 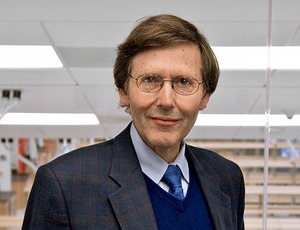 If the neurons in the brain were like people in a metropolis, the fetal brain’s mid-gestational growth spurt in the OSVZ would be like the suburban population boom on the outskirts of cities in the late 1900s.

Each time the OSVZ neural stem cell divides, it regenerates itself and also spins off an intermediary cell. These intermediary cells, in turn, divide many times to produce specialized neurons. Each stem cell sends a branch upward through the layers of cortex, and this extension acts like a guide wire for newborn neurons traveling through the cortical layers.

“There is a whole region that’s found in the human brain, but not in the rodent, where cells are born and delivered to the developing layers of the cortex,” Kriegstein says. “The newly described stem cells are responsible both for making the nerve cells and for guiding them to their proper locations in the cortex, where they form cell columns.”

As in all regions of the cortex, the neurons in these vertical columns form electrical circuits, and myriad columns are aligned horizontally throughout the plane of the cortex. The recently discovered OSVZ stem cell and its progeny appear to drive growth outward from the edges of this horizontal plane, Kriegstein says.

Evolution from Mouse to Human

Although the OSVZ region is absent in the mouse, Kriegstein’s lab team nonetheless went looking in the mouse brain for a stem cell similar to the OSVZ stem cell. They found it, but only in small numbers. Furthermore, in the mouse, these stem cells do not spin off the intermediate progenitors that powerfully amplify the growth of new neurons in the human brain.

This time-lapse movie shows cell division in a newly discovered type of brain stem cell in the mouse. The stem cell is similar to a human stem cell identified by the same UCSF laboratory research group last year. The cell nucleus moves in an unusual way, the researchers found. The movements may influence development within the brain’s cerebral cortex in ways that are not yet well understood. Images were acquired every 10 minutes. The playback rate is seven frames per second.

This time-lapse movie shows a different type of unusual movement observed in another type of dividing stem cell in the mouse brain. Radial glia stem cells arose earlier in evolution and undergo cell division at the surface of the brain’s central cavities, called ventricles.

Still, this latest rodent discovery more closely links mice and humans, and there is a possibility that the mouse may become a more valuable tool for studying human brain disorders as a result, according to Kriegstein. Kriegstein’s lab team describes its latest mouse studies in the April 10 online edition of Nature Neuroscience.

“This tells us that this type of stem cell developed more than 100 million years ago,” Kriegstein says. “That means the process of cortical evolution was more gradual than many had thought. This is not a feature that suddenly arrived in the primate. It developed over a very long period of time through successive alterations and changes, and it eventually led to what we have in the human.”

In both humans and mice, scientists had previously identified brain stem cells that generate neurons from the edges of the ventricles – fluid-filled spaces at the center of the brain – and from a layer, called the subventricular region, just above the ventricles. These earlier-arising stem cells produce fewer neurons in comparison with the human OSVZ stem cells and their daughter cells. Even if their inherent growth potential were not already limited, their expansion would be limited by the size of the ventricles, Kriegstein says.

As the name implies, the outer subventricular zone is farther away from the ventricles. The intermediate progenitors spun off by the OSVZ stem cells are free to propagate neurons with little constraint, Kriegstein says. The folding cortex can expand farther and still fit within the skull.

Using real-time imaging of brain tissue under the microscope and fluorescently labeled molecular markers, Kriegstein’s lab team discovered peculiar movements in stem cells shortly before they underwent cell division. The movements – never seen before – are distinctive and are different in the various stem cell types, Kriegstein says. Defects in the machinery controlling these movements might play a role in different brain malformations, he believes.

“It’s only because we were making movies that we were able to see these movements,” he says. “We’re not sure why the cells are doing this, but we’re very interested in finding out.” 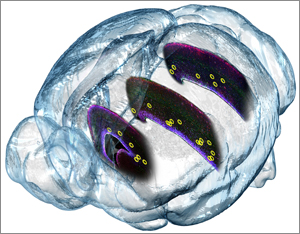 In the mouse brain UCSF researchers discovered a small population of stem cells (yellow circles) that are similar to a type of stem cell they discovered last year in the human brain, where the cells are capable of spinning off many new neurons in the cerebral cortex. The mouse discovery sheds light on brain evolution and raises hopes for learning more about human brain development and disease from mouse studies.

Key to these movements are structures found in every dividing cell – namely, a pair of centrosomes. Centrosomes are poles that form on opposite sides of the cell’s nucleus prior to cell division. Fibrous spindles emanate from these poles and are used to pull replicated chromosomes apart, so that the chromosomes and the entire DNA they contain can be divided between daughter cells.

Mutations that affect the performance of centrosomes already have been associated with inborn disorders. One such disorder is lissencephaly, in which the cortex fails to fold up into its cauliflower shape. Another is microcephaly, in which the brain appears more or less normal, but may be as little as half the size of a healthy brain.

Schizophrenia and autism are considered to be diseases of abnormal brain development, Kriegstein notes. Scientists had considered the mouse brain too simple to help them understand the origins of these human afflictions. But now the Kriegstein lab team’s discovery of a new type of stem cell shared by the two mammals raises hope that the mouse can provide at least some clues about normal cellular behaviors in developmental pathways that may go awry in these disorders.

The continued exploration of different stem cell types and the identification of the types of neurons that are their descendants are crucial to obtaining a better understanding of a range of neurological disorders that strike specific types of neurons or brain regions while sparing others, Kriegstein says. Among the most common of these disorders are Alzheimer’s disease and Parkinson’s disease.

Similar studies are required to develop the capability to reliably grow the specific types of neurons needed to regenerate tissue that is damaged as a result of these diseases, according to Kriegstein.

Real-time imaging already has been a valuable tool in studying cell lineages during development, Kriegstein says.

“By simply looking at these cells in fixed tissue, you can get a sense of the diversity of cells you can find, but it does not tell you where they came from or how they relate to each other,” he says. “But by watching one cell divide, and then by watching the daughter cells migrate and divide, you begin to see the relationships between different cell types. One type is derived from another. That’s information you really couldn’t get any other way.

“We are looking for active genes that are unique to each type of neuron-producing stem cell or progenitor cell,” he adds. “We’re sure they exist, but we don’t know what they are yet. When we find them, we will be able to use them to sort cells and, ultimately, to make huge numbers of specific types of neurons in the laboratory.

“Then we can really go to town with studies of diseases that affect specific cell types in the brain.”