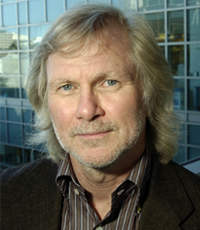 Frank McCormick, PhD, director of the UCSF Helen Diller Family Comprehensive Cancer Center, discusses the complexities and challenges of cancer in a video interview with the American Association for Cancer Research (AACR).

“The more we understand about cancer the more complicated it seems to get,’’ he said. “We need radical new ways of treating cancer as well as preventing cancer.’’

McCormick is the president-elect of the AACR, the world’s largest and oldest scientific organization focused on preventing and curing cancer. The interview took place during the AACR’s annual meeting April 2-6, 2011 in Florida.

McCormick was elected by the AACR’s members – a group that consists of 33,000 basic, translational and clinical researchers.

An internationally renowned molecular biologist and cancer researcher who helped pave the way toward the development of targeted cancer therapies, McCormick has led the UCSF cancer center program since its inception in 1998.

McCormick joined UCSF in 1997. He is an eminent expert on the Ras signaling pathway that plays a central role in many cancers. He founded the biotech firm Onyx Pharmaceuticals in 1992 and developed Nexavar, used to treat primary kidney cancer.