An experimental drug lessens symptoms of a rare form of childhood leukemia and offers significant insight into the cellular development of the disease, according to findings from a new UCSF study. The mouse model research could spearhead the development of new leukemia therapies and paves the way for future clinical trials in humans. 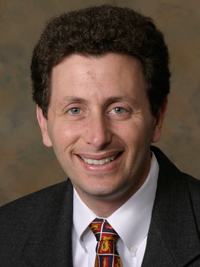 “Although this drug did not produce a cure, it alleviated the symptoms of leukemia as long as the treatment was continued and delayed the development of a more aggressive disease,” said senior author Benjamin Braun, MD, PhD, a pediatric cancer specialist at UCSF Benioff Children’s Hospital. “Maintaining a clinical remission for as long as we can may help patients who don’t have other options, and perhaps will allow us to approach this disease as a chronic, but manageable, condition.”

Study results are published in the March 30, 2011, online edition of the journal Science Translational Medicine.

The study focused on a type of leukemia called juvenile myelomonocytic leukemia, or JMML. An aggressive blood cancer usually diagnosed in patients younger than 5, JMML accounts for 1 to 2 percent of all childhood leukemia cases.

The disease develops in the bone marrow and leads to an elevated white blood cell count that interferes with bone marrow’s ability to produce healthy red blood cells. The abnormal increase in white blood cells occurs when genetic changes, or mutations, arise in the genes that encode proteins in a cellular signaling network called the Ras pathway. This network, controlled by the Ras protein, is a critical regulator of cell growth and a frequent target of cancerous mutations.

Currently, JMML is curable only through bone marrow transplantation, in which healthy blood stem cells are extracted from a matched donor and intravenously transplanted into the patient. Still, nearly half of patients relapse after undergoing a transplant, and others are not candidates for transplantation because of advanced illness or the lack of a suitable donor, Braun said.

The researchers treated mice genetically engineered to have JMML with a drug that inhibits a signaling protein called MEK. The drug, known as a MEK inhibitor, blocks just one of the many chemical pathways controlled by Ras. Although several pharmaceutical companies already are developing these drugs, this is the first time a MEK inhibitor has been piloted as a treatment for JMML.

Remarkably, within one week of starting treatment, leukemia symptoms in nearly all of the afflicted mice reversed. Specifically, mice that were treated with the MEK inhibitor produced more red blood cells and fewer white blood cells than untreated mice, and the anemia commonly associated with JMML also disappeared.

According to the researchers, a particularly compelling aspect of the findings is that even after treatment, the majority of the animals’ blood was still being produced by the mutant cells that previously caused the disease. 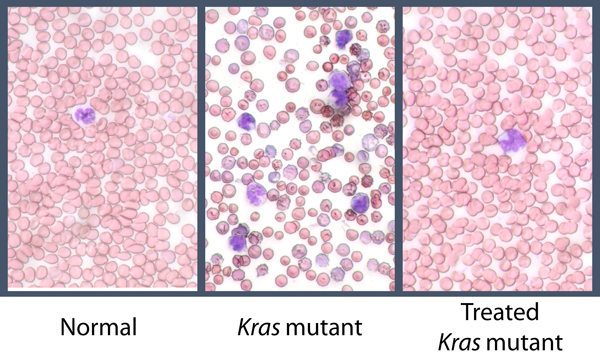 “The most striking aspect of our findings was that the treatment helped the mice not by making the cancer cells go away, but by forcing them to act like normal cells, despite their mutation,” said first author Natalya Lyubynska, MD, an internal medicine resident at the University of Michigan. Lyubynska completed this research in Braun’s lab as a UCSF medical student, with support from the UCSF Helene and Charles Linker Fellowship and was awarded the UCSF Dean's Prize for Outstanding Student Research for this work.

Through the positive effects of treatment, the study also helps clarify the mechanism by which the Ras signaling pathway regulates cell growth and confirms that the MEK protein plays a key role in the development of JMML.

“It appears that Ras causes disease in part by producing an imbalance of the kinds of cells made in the bone marrow, and that inhibiting MEK can reverse that process,” Braun said. “We hope one day to improve on these results by finding a way to completely eliminate leukemia cells. At the same time, we are also learning more about how bone marrow makes the right numbers of each type of cell every day.”

The research was supported by grants from the National Institutes of Health, the Aplastic Anemia and Myelodysplastic Syndrome Foundation, the MPD Foundation, the V Foundation for Cancer Research, the Ronald McDonald House Charities of Southern California/Couples Against Leukemia, the Jeffrey and Karen Peterson Family Foundation and the Frank A. Campini Foundation.