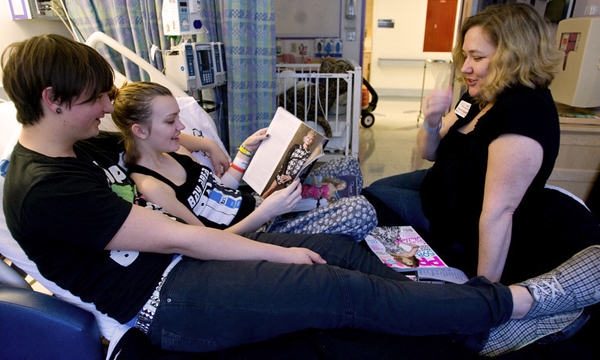 Rachel Hale, 16, is hunting for her dream gown on the Internet, consuming stacks of prom and fashion magazines while getting second opinions from her boyfriend, Cameron, 17.

Like teenagers all across the country, dreams of the perfect prom are dominating her days. But unlike other teens, most of her prom planning takes place from her hospital bed at the UCSF Benioff Children’s Hospital, where she’s being treated for a combination of gastrointestinal and orthostatic conditions.

All through the hospital, teenage patients are searching for a prom dress, planning hair and makeup and strategizing about photo sessions as they prepare for the first-ever UCSF patient prom – the only hospital prom for teens in the San Francisco Bay Area.

Rachel was 14 when she started feeling symptoms in her home in Walnut Creek. “One night I woke up in pain and it didn’t go away. It was just a month and a couple days after Cameron and I started dating.”

Despite nine admissions to the hospital and stretches up to two months at a time when she couldn’t consume food, Rachel remains a positive and enthusiastic fashion-loving teenager who lights up when talking about her first prom.

“I’m nervous about not having enough time to find a dress since we know we’ll be here at least a couple more weeks,” said Rachel, who wants to pursue a career in fashion design or film. “Maybe we can order samples to the hospital.”

The glow-in-the-dark-themed prom was first conceived several years ago by UCSF Child Life Specialists Lisa Gray and Tiffany Martorana who have taken on most of the planning efforts, despite their already packed schedules.

“These teens turn into adults before they’re ready and we’re always thinking about what we can do specifically for them,” said Gray. “Teens don’t want a visit from Snow White, they want a way to spend time with each other.”

The prom is a continuation of a teen-focused, multi-year project at the UCSF Benioff Children’s Hospital. The Child Life Department recognizes the integral role hospital child life programs play in the healing process and works with children, teens and their families to ensure that each child's developmental and emotional needs are met. 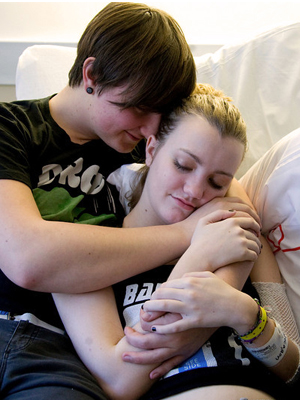 Cameron and Rachel enjoy a quiet moment. The couple have been dating for two-and-a-half years.

But planning a hospital prom requires several special considerations. There are the obvious difficulties of transforming the cafeteria into a prom-worthy locale complete with a DJ, fresh flowers, dance floor and high top tables with glow-in-the-dark necklaces, glow glasses and glow sticks. But also managing infection control issues, securing funding and in-kind donations and making sure patients who are unable to attend due to medical constraints still feel included are just some of the obstacles Martorana and Gray are facing.

Certain patients, such as teens with cystic fibrosis, can’t be in the same room together. Make-up artists and hairstylists donating their time the day of the prom must use single use applicators. And patients in isolation won’t be able to attend, but will still receive the goody bag available to all attendees.

The prom will take place on April 15 in the Moffitt Café and is entirely complimentary, including parking. Each patient can bring up to two friends who must also be between the ages of 14 to 19.

“Of the RSVP’s we’ve gotten, most of the teens are bringing two friends,” said Gray. “It’s a safe and benign way to introduce their friends to the hospital and it normalizes it, especially for kids with chronic illness who are here a lot.”

And in true prom tradition, no parents are allowed. If patients do require a caregiver, they are encouraged to bring a trusted adult other than a parent.

“This is a night that’s about them, and not about being in the hospital or being sick,” said Martorana. “We hope to provide as normal an experience as possible, while still maintaining safety.”

Rachel, who is partial to long couture gowns, wants her prom dress to be “classy, but with a little bit of an edge. I don’t get to dress up or do hair and makeup very often, so I want it to be over the top.”

Cameron plans to don his first tuxedo and buy a corsage, a huge change from their normal dates watching movies and “just hanging out.” Cameron is a common fixture at the hospital, often sitting in the chair in Rachel’s room, or squeezing next to her in bed.

“Our biggest pastime is sitting next to each other and doing unrelated things,” said Cameron.

For Rachel, the biggest value is having his unwavering support. “The most important thing for us is knowing the other person is there. Getting sick has definitely made our relationship mature faster, but I wouldn’t have it any other way.”

But on prom night, Rachel will be like any 16-year-old going with her boyfriend to prom.  “I really like the Audrey Hepburn look, and might do that feel with a bun and pearls,” she said. “But it all depends on the dress.”