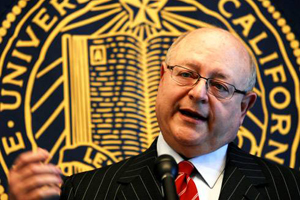 The University of California Board of Regents took the unusual step March 16 of devoting its entire public session to analyzing UC's budget crisis and discussing the tradeoffs inherent in various scenarios for coping.

The ten-campus University system faces a stark gap between diminishing state support and rising operational costs — a gap that will grow larger in coming years unless UC finds a stable source of revenue growth.

"This is not a blip. This is 20 years of reduced funding for the university," UC President Mark G. Yudof told the board. "We need a long-term plan. Our collective job is to figure out how to do it."

Yudof noted that UC already has made substantial budget cuts in the last few years, and that there currently are 8,000 faculty and staff positions unfilled. As the Regents and UC administrators evaluate how best to go forward, preserving UC's world-class research and education must be a priority, he said.

"In all the variables you hear today, there is one constraint and a guiding star we must follow and that is quality. Quality is non-negotiable."

Regents Chairman Russell Gould proposed the daylong workshop to give the regents the fullest picture possible of the fiscal dilemma facing the University and the difficult choices that lie ahead.

UC expects to have a budget shortfall in fiscal 2011-2012 of nearly $900 million. That figure includes a proposed $500 million cut in state support as well as rising costs for mandatory expenses such as utilities, retirement plan contributions and health insurance.

Gov. Jerry Brown proposed cutting UC's funding as part of an overall strategy for closing a $26 billion state deficit. The proposed reduction follows years of unpredictable and diminishing levels of state support. If Brown's budget is enacted, UC's state funding in fiscal 2011-2012 will be at the same level as 1998-1999, when there were 73,000 fewer students.

And for the first time in University history, student tuition would contribute more to UC's core budget than state funds do.