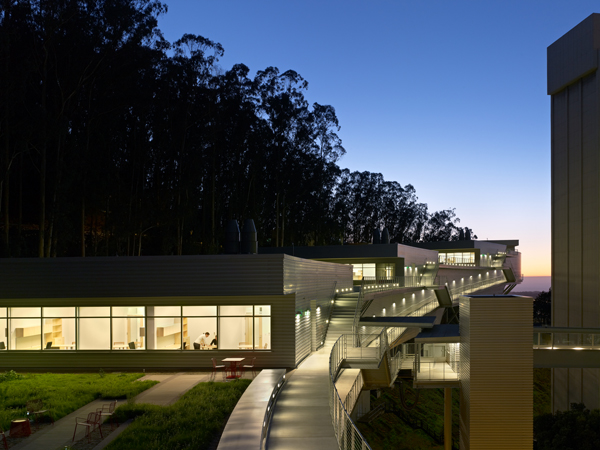 Illuminated at sunset, the Ray and Dagmar Dolby Regeneration Medicine Building at UCSF curves horizontally along the Parnassus Heights hillside.

The cantilevered Ray and Dagmar Dolby Regeneration Medicine Building that climbs up a steep slope at UCSF's Parnassus campus is gaining national recognition as a stunning architectural and engineering feat.

UCSF recently celebrated the official opening of the $123 million building, which serves as the new headquarters of the Eli and Edythe Broad Center of Regeneration Medicine and Stem Cell Research at UCSF. Inside, some 25 investigators representing both basic and clinical sciences are working to develop strategies for treating a variety of diseases and conditions, such as birth defects, diabetes, stroke and cancer.

In the latest honor, the AIA/New York named the stem cell research building a “merit” award winner for its exemplary originality. The criteria used by the juries included design quality, program resolution, innovation, thoughtfulness and technique. Projects had to be completed by architects/designers practicing in New York, or be New York City projects, designed by architects/designers based elsewhere. In all, judges reviewed 433 entries in four categories, including 184 submissions in the architecture category alone.

Notably, the building sets a high bar for new green laboratory projects. Aiming for Leadership in Energy and Environmental Design-New Construction (LEED-NC) Gold and awaiting final certification, the light-filled building is designed with communal break rooms to promote collaboration among researchers. To read more about the building’s eco-friendly features, go to the UCSF Sustainability website.

The 68,926-square-foot building, constructed on a 60-degree slope, is designed to foster intensive collaboration and a cross-pollination of ideas among scientists representing a broad spectrum of labs and disciplines.

The structure is a series of four split-level floors or pods with terraced grass roofs that provide a welcome connection to nature and sweeping views of the Pacific Ocean. Each of the four floors steps nine feet higher that the next and the labs flow into each other, with office and lounge areas located on the routes between labs, promoting interaction throughout the building.

The main entrance to the building is 90 feet above ground and is accessible via a 140-foot long glass enclosed structural steel bridge that connects to the ninth floor of Health Science West building. The glass along the bridge gives credits to California voters, whose support of Proposition 71 in 2004 helps finance stem cell research through the creation of the California Institute for Regenerative Medicine (CIRM). CIRM is the state agency established to administer the $3 billion, tax-payer supported fund for stem cell research and construction.

The 1,270-ton structure, which was the cover story in Modern Steel Construction magazine in January 2010, is supported by a complex steel framework to maintain stability on the steep slope. It is fitted with seismic isolation bearings that will "allow the building to slide 26 inches in any horizontal direction and two inches vertically to 'filter' [an] earthquake's movement, giving the building a relatively gentle ride," the magazine reported.

To spur construction innovation, UCSF held a nationwide design-build competition based on a preliminary design prepared by Rafael Viñoly Architects and structural engineer Nabih Youssef Associations of San Francisco. The building, the first new research facility on the Parnassus campus in years, is amazing for several reasons not the least of which is its accelerated time frame for construction -- two years. Construction began in August 2008 and the building was completed in October 2010. Researchers began to occupy the building in November 2010.

The list of credits for the design and construction of this building is long. The principal players include: