In a finding that once again displays the power of the female, UCSF neuroscientists have discovered that teenage male songbirds, still working to perfect their song, improve their performance in the presence of a female bird.

The finding sheds light on how social cues can impact the process of learning, the researchers said, and, specifically, could offer insights into the way humans learn speech and other motor skills. It also could inform strategies for rehabilitating people with motor disorders or brain injuries. 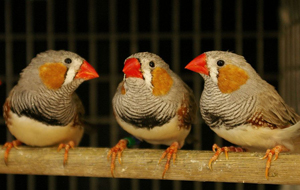 The study was reported in a recent early online edition of Proceedings of the National Academy of Sciences (Jan. 10, 2011).

Like humans, songbirds learn to sing by first listening to adult birds and then mimicking those sounds through a process of trial-and-error. Their initial vocalizations are akin to the babbling of babies.

Until now, scientists and bird watchers alike have thought that young birds could only produce immature song. However, in a process that involved recording and studying male zebra finch song, the scientists discovered that, in the presence of a female, the birds sang much better than when they were practicing their song alone.

“We were very surprised by the finding,” said senior author Allison Doupe, MD, PhD, a professor of psychiatry and physiology and a member of the Keck Center for Integrative Neuroscience at UCSF. “The birds picked the best version of the song that they could possibly perform and they sang it over and over again. They sounded almost like adults. It turns out that teenagers know more than they’re telling us.”

Normally, the young birds’ song is quite poor because they are practicing their vocalization through the trial-and-error process, said the first author of the study, Satoshi Kojima, PhD, a postdoctoral fellow in the Doupe lab. “Something must be happening in response to a reinforcing social cue that allows them to pick out and produce their best possible performance. This demonstrates the power of social cues to shape brain behavior.”

The finding could lead to a better understanding of the brain mechanisms supporting language acquisition as well as many other learned behaviors, said Doupe.

“We know that variation by trial and error is an important part of the learning process,” said Doupe. “But discovering precisely how social cues influence motor production during song learning in birds could shed light on the brain mechanisms that underlie similar processes in humans learning how to speak, and potentially allow scientists and clinicians to harness these mechanisms when learning is not progressing properly.”

Social cues are well known to powerfully influence the processing and production of human speech.A 2003 study by Michael Goldstein and colleagues showed that, in the presence of their mothers, babies’ babbling improves. The current study underscores the usefulness of songbirds as a model for understanding the brain mechanisms underlying social modulation of language learning and other motor skills.

Like other songbirds, when they are fully adult, zebra finches sing two types of tunes: undirected, which they sing when alone, and directed, which is slightly more precise, and is favored by females. Adolescent male songbirds, which are just becoming sexually mature,usually sing undirected song,which at that stage is highly variable and immature and sounds like vocal practice.

In their study, the UCSF scientists coaxed the adolescent males to sing directed, courtship song towards females, and analyzed these songs using quantitative computer software. In the undirected context, the birds’ song was variable, with low similarity to their final recorded adult song. In the directed context, the song was similar in syllable structure and sequence to that of the adult song.

The finding points to the importance of trial and error in motor learning as a means of perfecting vocalizations, said Doupe. “In the process of learning song, birds must develop their motor neurons to effectively mimic what they’ve heard. The variability that characterizes the imperfect youthful song of teenage birds is generated by basal ganglia circuits, and it’s what allows birds to experiment to find what works best.

“Our finding suggests that, though teenage birds have the ability to produce more complex songs, they are only able to do so on a social cue. “It’s possible that the social cue somehow turns off the variability that is responsible for improving vocal learning,” she said.

The research was supported by the National Institutes of Health.