Robert Klein, right, chair of the governing board of the California Institute for Regenerative Medicine (CIRM), gets a preview of the stem cell research building at UCSF with his son, Robert, in June 2010.
The opening of the Ray and Dagmar Dolby Regeneration Medicine Building on Feb. 9 signified a major turning point in UCSF’s stem cell research program and represented a personal triumph for individuals who played a key role in the evolution of the promising field. For Robert Klein, chair of the California Institute for Regenerative Medicine (CIRM) - the state agency created by 7 million voters to administer the $3 billion tax-payer supported fund for stem cell research - UCSF holds special significance. His son Jordan has type 1, or juvenile-onset, diabetes that can destroy the eyelet cells in the pancreas and lead to blindness, kidney loss and amputations. “Back in those days in the mid-1970s no one thought recumbent DNA would ever lead to any human products,” said Klein at the dedication ceremony at the Parnassus campus. But it was at UCSF where “scientists announced the antecedent critical discovery that led to artificial human insulin that keeps my son alive every day.” Now Klein hopes stem cells will help cure diabetes, a disease that affects 25.8 million children and adults in the United States. “Stem cell research science, built on the early work of UC San Francisco doctor Gail Martin, who indentified stem cells in mice, is building the foundation for this whole new field,” said Klein. “It is this research that brings us the possibility of changing the future of human suffering.”

Jeff Sheehy, director for communications at the UCSF AIDS Research Institute, has served as CIRM board member as a patient advocate for HIV/AIDS since its inception in 2004. While he supported the campaign for proposition 71 in 2004 which established CIRM and devoted $3 billion to human embryonic stem-cell studies, at the time HIV wasn’t considered a major target of stem cell research. “People in the HIV community weren’t thinking of stem cells as something that would bring us any benefit,” said Sheehy, who was honored with the Chancellor’s Award for Public Service for patient advocacy efforts in 2009. But in February 2009, that sentiment changed with the publication of a report in the New England Journal of Medicine that showed a 42-year-old HIV patient with leukemia had no detectable HIV in his body following a bone marrow transplant that contained stem cells. While severe side effects were reported and questions remain about whether the treatment can be reproduced, its one-time success ignited interest from the HIV-positive community. “That really is what got people to sit up and say ‘woah, what is going on here?,’” said Sheehy. “It was a decisive moment." San Francisco city attorney David Serrano Sewell was appointed by then California Lt. Governor Cruz Bustamonte to CIRM's oversight board as a patient advocate for multiple sclerosis (MS), a decision he says emphasized the meaning of having actual patients in advocacy roles. “Bustamonte understood the importance of a patient advocate and the value of bringing their perspective and sensitivity to the table,” said Sewell. As vice chair of the facilities working group, Sewell was tasked with awarding the grants and loans for the construction of buildings to advance stem cell research. UCSF's state-of-the-art stem cell science building became a beneficiary of that funding process. “I got a chance to participate in something from the start and it’s a magnificent success. It’s a gorgeous building and one of the crown jewels of UCSF,” said Sewell. “We hope the resources yield some important understanding of diseases, cures and therapies. As a patient at UCSF and a San Franciscan, it was a particular source of pride to see its development.” 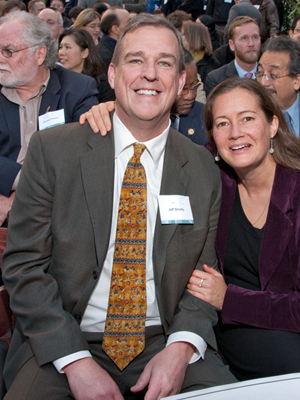 Jeff Sheehy, a patient advocate who serves on the governing board of the California Institute for Regeneration Medicine (CIRM), and Melissa King, executive director of the governing board of CIRM, celebrate the naming of the Eli and Edythe Broad Center of Regeneration Medicine and Stem Cell Research at UCSF in December 2008.
The new stem cell building is home to 25 of the top stem cell laboratories in the United States where scientists work to better understand how undifferentiated stem cells become the differentiated cells that make up specific types of tissues and organs and can be applied to the treatment of diseases such as diabetes, multiple sclerosis and cancer. The advancement of stem cell therapy is quickly transforming how doctors treat patients with diseases that at one time may have been considered grim. Arnold Kriegstein, MD, PhD, and director of the Eli and Edythe Broad Center of Regeneration Medicine and Stem Cell Research at UCSF, recalls being a junior resident 30 years ago and feeling frustrated about the few treatment options for brain diseases. The chief resident summed up the scope of what neurologists could do at the time. “Two words,” said Kriegstein. “Diagnose and adios.” “Now, 30 years later, there’s a new science involving stem cell biology that has the potential to really transform the bleak prognosis that we suffered under for many years,” said Kriegstein. “It’s clear we’re in the midst of a revolution that has in its heart nothing less than the goal of transforming our view of disease.” And for Sheehy and the HIV community, they are ready for that revolution. “The HIV community is starting to put pressure on research community to come up with a cure,” he said. “Right now what we have is not a cure, it is sustaining life.” As HIV-positive patients are being treated earlier and living longer, they are severely impacted by cardiovascular disease and non-HIV-related cancers at significantly higher rates that the general population. “But UCSF researchers are on the front lines of identifying these issues,” Sheehy said. Sheehy, who was diagnosed with HIV in 2007, says that while virtually the entire time the disease has been undetectable he, like many HIV-positive patients, shows cardiovascular risk factors. “Even if you have perfect control, you’re still going to see a decline in lifespan by at least a decade,” he said. While the investments in stem cell research being made today at UCSF will yield important dividends in the future, Sewell recognizes there is a great unknown whether he will individually benefit in the fight against MS, an autoimmune disease that affects the brain and spinal cord. “I hope it is next week for MS and every other disease, but we don’t know. We’re getting closer every day,” he said. “We’re all sprinting trying to get to the finish line, and I hope I’m there to benefit from it but I might not. I’m thinking about the person five years from now, 10 years from now who has more options than I did when I was diagnosed. I’m thinking of them." Photos by Susan Merrell