Scientists are reporting the first direct evidence that a subtle change in the physical properties of a tissue can affect its function. The finding has immediate implications for understanding several rare hearing disorders, they said, and ultimately could offer insight into such conditions as osteoporosis, arthritis, cardiovascular disease and cancer.

In their study, the scientists discovered that blocking the function of a particular molecule in the ear bone of mice decreased the hardness of the bone, causing hearing loss. Reactivating the molecule restored the bone’s hardness – and the animals’ hearing.

The research likely explains the previously unknown cause of hearing loss in the human disease cleidocranial dysplasia, a genetic bone syndrome,said co-author Lawrence Lustig, MD, UCSF professor of otolaryngology, and may explain hearing loss associated with some other bone diseases.

More broadly, the finding reveals the molecular pathway that regulates the physical properties of extracellular matrix – the interlocking mesh of molecules between cells – in the ear’s cochlear bone. The matrix is responsible for the hardness of human tissues, ranging from stiff bone and enamel to compliant brain and skin.

Perhaps most intriguing is the discovery that variations in the physical properties of extracellular matrix affect tissue function. This finding should lead to insights into abnormal matrix properties in the tissues of diseases throughout the body, the researchers said, including osteoporosis and arthritis. 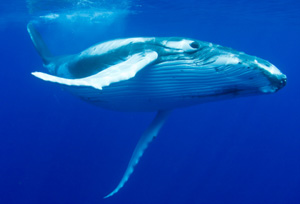 The whale’s ear bone is believed to be the hardest in its body, possibly helping the animal hear under water.

“Our finding demonstrates that establishing and maintaining the proper calibration of physical properties is essential for healthy tissue function,” said the senior author of the study, Tamara Alliston, PhD, assistant professor of orthopaedic surgery and a member of the Eli and Edythe Broad Center of Regeneration Medicine and Stem Cell Research at UCSF.

Scientists have known that physical cues, such as extracellular matrix stiffness, direct the differentiation of stem cells into specific cell types, such as heart, liver and brain cells. They also have known that disruption of these cues underlies a wide range of diseases, such as osteoarthritis, cardiovascular disease and cancer.

However, they have not known the molecular mechanisms that establish the physical properties of extracellular matrix, nor the link between these properties and tissue function.

In the current study, recently reported in EMBO (online Sept. 17, 2010), the team, led by Jolie L. Chang, MD, a resident in the UCSF Department of Otolaryngology and Head and Neck Surgery, set out to investigate the mechanisms involved.

These skeletal deformities, seen in the human genetic bone disease cleidocranial dysplasia, result from a defective copy of the Runx2 gene. Patients with CCD experience “sensorineural” hearing loss – caused by damage to the cochlear bone or nerve damage.

Given these conditions, the teams used two mouse models of CCD to study the regulation and role of bone matrix properties in the cochlear bone. 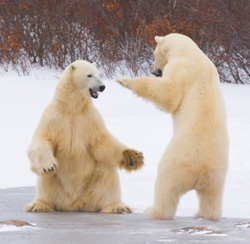 The polar bear’s leg bone is believed to be the hardest in its body.

They focused on this bone in part because of anecdotal evidence in patients, and research in whales, flamingos and polar bears, indicating that the bone is the hardest in the body, in the case of whales possibly helping the animals hear under water. The required stiffness, the team suspected, likely would be precisely calibrated.

They first conducted a nanoscale analysis of several mouse bones in the head and ear, establishing that the cochlea bone was by far the stiffest.

Then, in what they considered a major insight, they discovered that TGF-β regulates Runx2 to establish the physical property of the extracellular matrix of the cochlea bone. “This told us,” said Chang, “that Runx2—a key transcriptional regulator that helps the cell select its cell fate—also controls the physical properties of the matrix.”

Finally, by manipulating Runx2 activity through TGF-β, the team determined that the physical quality of the bone matrix affects hearing.

Now, the team is investigating the molecules “downstream” of Runx2, to gain further insight into the mechanism regulating the physical properties of bone. They also are studying if these mechanisms define the stiffness of matrices in other skeletal tissues.

“We want to see if TGF-β targets the cartilage transcription factor to make cartilage more or less stiff,” Alliston said. “We think that the stiffness is degraded in arthritis and that this further disrupts chondrocyte cells, exacerbating the disease.”