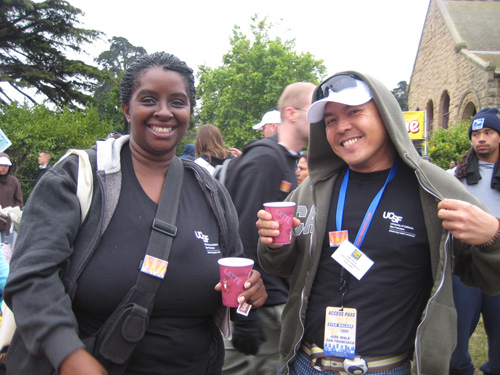 Faculty, staff, students and trainees are invited to register for AIDS Walk San Francisco on Sunday, July 18, the annual trek to raise money for HIV/AIDS research, prevention and treatment.

Funds raised by AIDS Walk San Francisco enable the foundation to provide services that improve the quality of life for thousands of people living with HIV/AIDS and focus prevention efforts on those at greatest risk of contracting the disease. With a goal of radically reducing the number of new HIV infections in San Francisco over the next five years, the foundation is leading the way in advocating for critical policy changes in Sacramento and Washington, DC that will ensure broader access to HIV prevention, treatment and care so people can live healthier, longer lives.

This year’s event will begin on July 18 at 9 a.m. with sign-ups at the UCSF station in Mothers’ Meadow at San Francisco’s Golden Gate Park. An opening ceremony starts at 9:45 a.m. and walkers will hit the pavement at 10:30 a.m. More details about the event are posted on the AIDS Walk San Francisco website.

“UCSF has been a major fundraising force in AIDS Walk San Francisco since it started 24 years ago,” says Lisa Cisneros, assistant director of UCSF Public Affairs and co-chair of the UCSF AIDS Walk Steering Committee. “We hope that members of the UCSF community will continue to walk the walk when it comes to public service.”

UCSF programs directly benefit from proceeds raised in AIDS Walk San Francisco. Last year, beneficiaries included the Center for AIDS Prevention Studies, which received $7,500 and 360 at San Francisco General Hospital, which received $5,000. The AIDS Health Project received a total of $17,000, which included funds from the walk.

To help boost UCSF’s overall fundraising total, those who raise at least $25 and join the spirited UCSF contingent will receive a complimentary catered breakfast and lunch and get an official UCSF AIDS Walk San Francisco souvenir T-shirt.

So far, UCSF has formed 12 teams that are recruiting and registering members to raise the most money in a friendly campuswide competition. This year, the winning team will claim bragging rights and a brand new trophy that will rotate every year to the team that raises the most money per walker.

UCSF will be offering members of the campus and community at large who participate in AIDS Walk San Francisco with discounted parking at the public parking garage on the Parnassus campus.

Members of the UCSF community can go to this AIDS Walk San Francisco webpage  to find and join one of the following 12 teams:

Edgar Micua, who works for the UCSF Center for Health and Community and leads the medical school team this year, is emerging as an AIDS Walk professional fundraiser. Micua, who received a MacBook laptop in 2008 after raising the most money individually, is already leading the team competition with nearly $2,500 raised as of May 27.