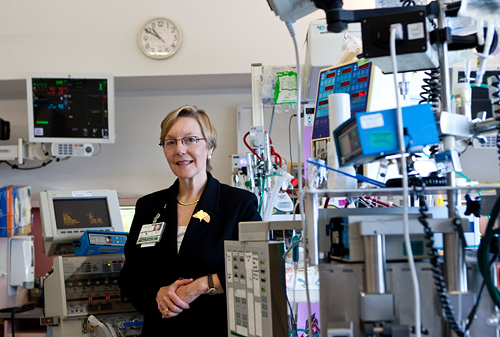 UCSF Children’s Hospital Surgeon-in-Chief Diana Farmer, MD, is profiled in the San Francisco Chronicle, appearing on the front page of the Sunday paper on May 23.

The article, now online at SFGate, describes Farmer’s upbringing as the only daughter of a flight attendant mother and Navy fighter pilot father. It explains how the self-described “science geek” first became interested in being a doctor and highlights Farmer’s dual role as a pioneer and advocate in pediatric medicine.

Farmer is the world’s first female fetal surgeon and only the second American woman to be inducted into the prestigious Royal College of Surgeons of England, which is committed to enabling surgeons to achieve and maintain the highest standards of surgical practice and patient care.

“She’s one of the great pediatric surgeons in the world. And that’s not just me saying it. That’s the international surgical community saying it,” William Schechter, MD, a UCSF professor of clinical surgery at San Francisco General Hospital, told the Chronicle.

Farmer is currently the principal investigator of a multicenter National Institutes of Health-sponsored clinical trial for the treatment of spina bifida in the womb. She also is deeply involved with the planning for the new UCSF Children’s Hospital at Mission Bay, part of a medical center complex which is slated to open in 2014. Farmer considers this project a reflection of her ongoing work as a patient advocate.

“Now a big part of my life has become advocacy for best care, particularly because children can’t be advocates for themselves,” she said.

Photos by Laura Morton/Special to The Chronicle

UCSF Today: Pediatric Surgeon to be Inducted into Royal College of Surgeons