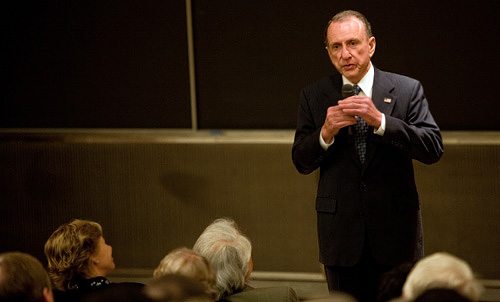 Senator Arlen Specter spoke about health care reform and other issues at a town hall meeting at UCSF on Feb. 16.

Senator Arlen Specter (D-PA) urged members of the UCSF community to share their perspectives with their elected officials and to exert political pressure on Congress to ensure that the nation’s ailing health care system is reformed and that scientific research and education are supported—even during tough financial times.

Specter came to UCSF last week for a town hall meeting to discuss issues of concern to the American people, including health care reform. The topic takes center stage today (Feb. 25) at the nation’s capitol after a year of national debate and gridlock. President Obama is hosting a bipartisan health care summit at Blair House, an event the White House is hoping will jump start the stalled health legislation.

On Monday, the Obama administration released a compromise proposal for health care reform that incorporates some measures passed by the Senate and House of Representatives last year. The plan does not include the public option—a government-run public health insurance alternative to private insurance, but does give the federal government new authority to block excessive rate hikes by health insurance companies.

The administration’s plan—which would be the biggest expansion of federal health care since the enactment of Medicare and Medicaid more than four decades ago—would extend coverage to 31 million Americans.

Senator Specter, who is seeking re-election to the US Senate, supports expanding health care to more Americans. In fact, Specter is among Senate Democrats to sign a letter calling on Majority Leader Harry Reid to pass the public health insurance option through budget reconciliation rules, which only need a simple majority vote in the Senate. The letter is posted online.

Specter said that the national discourse could benefit from expertise and knowledge of the UCSF community to provide a counterpoint to the Tea Party activists, who are getting a lot of attention and have starkly opposing views on the role of the federal government.

“I tell you you’ve got a lot of political muscle here,” he told faculty, staff, students and trainees gathered in Genentech Hall for the Feb. 16 town hall meeting.

Specter said that “political power can be exercised with just a little planning and execution.” 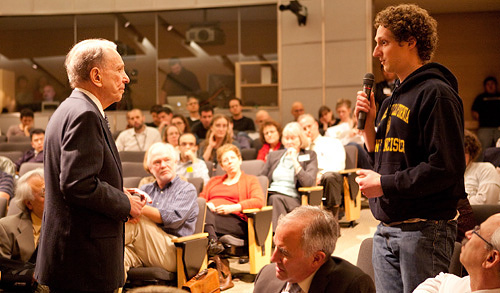 John Maa, MD, an assistant professor of surgery and director of UCSF’s Surgical Hospitalist Program, told Specter that while the US can take “great pride” in the many strengths of the American health system, he is concerned that the health care reform plans put forth so far don’t confront the real problems, “particularly in an overwhelmed emergency care system.”

As a general surgeon at UCSF Medical Center, Maa said he was on-call over the President’s day weekend. In the course of three days, he saw 30 new consults and performed 10 emergency operations. One of the patients was uninsured, yet he still underwent an emergency cholecystectomy.

“My concern is that the existing health care delivery system is overwhelmed, and that the proposed House and Senate bills will only overwhelm the system even further,” Maa told Specter. “The perspectives of frontline health care professionals have not been fully heard…”

In May, Maa will go to Washington DC for a six-moth sabbatical to share his perspective on health care reform with elected officials, working on advocacy projects with both the American College of Surgeons and the American Heart Association.

“My plan is to reframe the national discussion and to move it back in the correct direction, by enlightening Congress about the true problems facing health care, and to bring clarity to the profound misunderstandings and confusion which plague the current proposals,” he said after the town hall meeting.

Maa points to Massachusetts as a case in point. “In the early 2000’s, Massachusetts introduced a mandatory compulsory insurance system. The effects are now becoming clear today in 2010, as the waiting time to see a primary care provider in Boston is the longest in our country, at 49 days. Many patients drive hours to Western Massachusetts just to be able to receive primary care.”

First-year medical student Eric LaMotte also finds fault with the current health care reform proposals. He asked Specter to remind President Obama of his pledge to be open to ideas. LaMotte, who is an advocate for single payer health coverage, says he is working to get other elected officials on board. 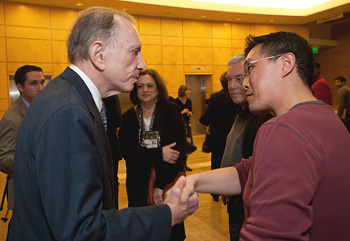 “We already know from our country’s history of failed statewide reforms that the President’s plan for health care reform will be ineffective and costly,” LaMotte said via email. “Instead, we should adopt a single payer system that would guarantee improved Medicare coverage for all Americans from birth to death, restore power to patients and physicians, and realize enormous administrative savings to pay for itself.”

At the town hall meeting, Specter acknowledged that elected officials “do not have all the answers in Washington DC. We are very much open to other suggestions and ideas.”

UCSF Chancellor Sue Desmond-Hellmann, MD, MPH, who welcomed Specter, commended him for his leadership as a strong supporter of the National Institutes of Health (NIH). UCSF is the second largest recipient of NIH funds, which has propelled major advances in treating Parkinson’s, cancer, heart disease and Alzheimer’s.

Specter said he saw that the NIH was the “jewel in the federal government” and when the federal economic stimulus package was being discussed, he took the opportunity to add $10 billion for the NIH through an amendment he proposed for the bill. Specter says he’s been trying to organize a million-person march in Washington DC to raise attention to the fact that out of the total US budget, the NIH receives $42 billion.

Specter, who has fought off Hodgkin’s lymphoma cancer in 2005 and 2008 after receiving chemotherapy in both cases, asked that UCSF scientists help find a cure for cancer. Specter said he would prefer not undergoing chemotherapy again, joking about his hair loss and his decision not to wear a toupee or to shave his head and “become a sex symbol.”

Desmond-Hellmann said that she and the Senator share the goal of “finding faster and better treatments and ultimately a cure for cancer.” She is leading efforts to advocate for the University at the state and national level, as well as pursuing opportunities for industry partnership to advance health sciences research.