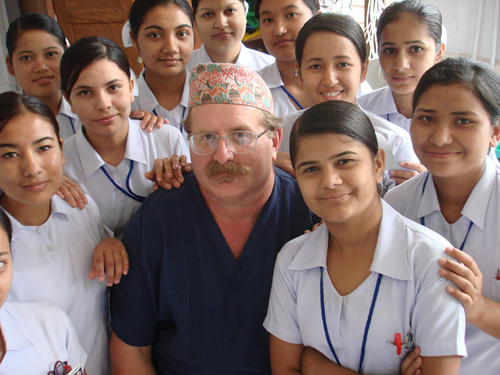 UCSF School of Nursing alumnus Joe Niemczura poses with some of his nursing students at Mission Hospital in rural Tansen, Nepal, where he has volunteered for the past three summers.

To the people of Tansen, Nepal, however, he is known as “Snake Man.”

Niemczura received the moniker in 2007 during his first summer at Tansen’s Mission Hospital, where he volunteers for three months a year as a nursing instructor. One of his many projects during that initial visit was to teach hospital staff how to use the facility’s mechanical ventilator to treat patients suffering from venomous snake bites.

“Sure enough, only a week after the training, we admitted a fully envenomated victim and ventilated him for three days,” Niemczura said in a recent interview with UCSF’s student newspaper, Synapse. “When he walked out of the hospital, I was a local hero and got the nickname ‘Snake Man.’”

Niemczura, who received his Master of Science degree in nursing from UCSF in 1981, chronicled that and many other experiences in his recent book, “The Hospital at the End of the World.” He shared some of his photos and reflections during a Jan. 5 talk at UCSF’s Mount Zion campus sponsored by the UCSF National Center of Excellence in Women’s Health.

Niemczura spends most of the year as an instructor in the School of Nursing and Dental Hygiene at the University of Hawaii at Manoa, and in 2007 he received enough travel funding through the school’s Office of International Health to pay for a round-trip ticket to Asia.

He said his decision to journey to Nepal — one of the world’s poorest countries — took even him by surprise.

“What possessed me to go to Nepal and teach nursing there?” he said. “It was the adult equivalent of running away to join the circus.”

At Mission Hospital, a 160-bed facility that serves a population of about 750,000 people, Niemczura comes in frequent contact with patients suffering from tuberculosis, AIDS and malaria, as well as malnutrition and burns resulting from nutrient-poor meals that were prepared using boiling oil in homes with no chimneys.

Niemczura also sees numerous lingering threats to maternal and infant health, despite an effort in recent years by the Nepalese government to reduce the high rates of mortality in those groups.

For example, Niemczura said, there are approximately 10,000 births per year in and around Tansen, but only 15 percent of those take place in a hospital setting; about one in three takes place in germ-ridden animal sheds, where the straw will absorb bodily fluids that would otherwise ruin the clay floors of the family’s house.

Niemczura said he hopes his book and appearances at places like UCSF will spark an interest among other health professionals to serve in areas with glaring and persistent medical needs and health disparities. He also hopes to shed light on the vital role of nurses, who he says are often overlooked in documentaries and books focusing on global health efforts.

“In my book, I tried to describe what it is that the nurses do, and how they run the hospital, going beyond just cataloguing the tropical diseases,” he wrote in a posting on Amazon.com’s Amapedia website. “It is ‘narrative nonfiction’; it’s meant to be the book I wish was available before my own first trip.”

The Hospital at the End of the World, by Joe Niemczura