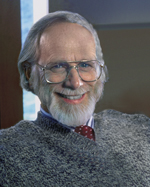 In his State of the Union Address of 1971, President Richard Nixon declared war on cancer. Thirty seven years later, cancer threatens to become the leading cause of death in developed nations. Some critics claim that we have literally “lost” the war on cancer. They are wrong, says UCSF’s J. Michael Bishop, MD, who shared the 1989 Nobel Prize in Physiology or Medicine for his research on cancer.

Bishop, who stepped down as chancellor of UCSF on June 30, 2009 but remains on the UCSF faculty, discussed The Future of Cancer “In Conversation” with KQED radio host Michael Krasny at the Jewish Community Center on Oct. 20, 2009.

“We have uncovered the fundamental malady that underlies cancer: malfunction of genes,” says Bishop. “As a result, we are poised to attack the disease in ways that could not have been imagined thirty years ago. We can win the war on cancer: in the short term, with more effective therapies; and in the longer term, by interdicting the causes of cancer to prevent the disease.”

Bishop, a professor in the Department of Microbiology and Immunology and director of the G. W. Hooper Foundation, a biomedical research unit at UCSF, discussed the latest advances in cancer research and treatment, including the short- and long-term strategies that are emerging to combat the genetic malfunction at the root of cancer.

To hear the podcast on In Conversation, scroll down 3/4 of the page: http://www.jccsf.org/content_main.aspx?catid=580