Dental student Daniel Hardy presents his work at the School of Dentistry’s Research and Clinical Excellence Day on Oct. 8.

The UCSF School of Dentistry recently paid homage to the research and clinical accomplishments of its faculty and students.

At its sixth-annual Research and Clinical Excellence Day on Oct. 8, the School of Dentistry recognized outstanding achievements in the areas of clinical care, scientific innovation and mentoring. In addition, various faculty members gave talks on their latest work, and dozens of graduate students, pre-doctoral candidates and postdoctoral fellows displayed posters highlighting their research.

Chancellor Sue Desmond-Hellmann, MD, MPH, praised the “sustained excellence” underscored by the School of Dentistry’s 17-year reign as the national leader in its field when it comes to research funding from the National Institutes of Health (NIH).

Like Elizabeth Blackburn’s Nobel Prize in Physiology or Medicine, that consistent level of support from the NIH is yet another example of “external recognition of the importance and quality of the research here” at UCSF, Desmond-Hellmann said.

And despite the recent state budget cuts and the global recession, the School of Dentistry remains “in great shape,” said Dean John Featherstone, MSc, PhD.

“We’re doing remarkably well, and we will continue to do so,” he said.

Among other honors bestowed at the Oct. 8 event, the school paid tribute to its 2009 Faculty Research Lecturer, Jane Weintraub, DDS, MPH, the Lee Hysan Professor and chair of the Division of Oral Epidemiology and Dental Public Health, for her decades of contributions to improving oral health.

In late December, the School of Dentistry received the largest grant in its history —$24.4 million from the NIH — to fund a Weintraub-led effort aimed at preventing early childhood tooth decay. The seven-year grant will support new programs at UCSF’s Center to Address Disparities in Children’s Oral Health (CAN DO), where Weintraub is the principal investigator. 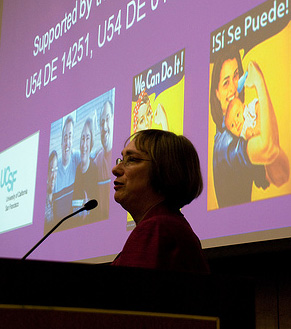 In light of those recent accolades, “I think of this as the Year of Jane Weintraub,” said Peter Loomer, DDS, PhD, chair of the Research and Clinical Excellence Day committee.

The School of Dentistry gave out two other major awards on Oct. 8: the Outstanding Clinician Award and the Mentor of the Year Award. In addition, the top three student presenters in the Graduate, Pre-doctoral and Postdoctoral categories received awards that were announced at the end of the day.

Student Presentations, Postdoctoral Category (first place): Adriane Joo, PhD, of the Department of Orofacial Sciences, for her study examining the role of the Spry2 gene in bone development.