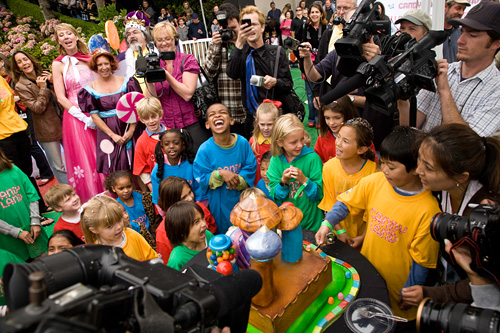 Children wait patiently, for the most part, for a slice of celebratory cake after playing a life-sized version of the board game “Candy Land” on San Francisco's Lombard Street on Aug. 19.

Candy isn’t known for its medicinal properties, but on Aug. 19, it proved to be just what the doctor ordered for a group of UCSF Children’s Hospital patients.

In honor of the 60th anniversary of Candy Land, the iconic board game’s maker, Hasbro, invited two dozen children ages 5 to 10 to play a life-sized version of the game along a famous stretch of San Francisco’s Lombard Street—a zigzagging quarter-mile path that closely resembles the actual game board.

Twelve of the participants were UCSF patients, including children suffering from chronic illnesses such as cystic fibrosis and asthma and those who had received or were awaiting transplants. 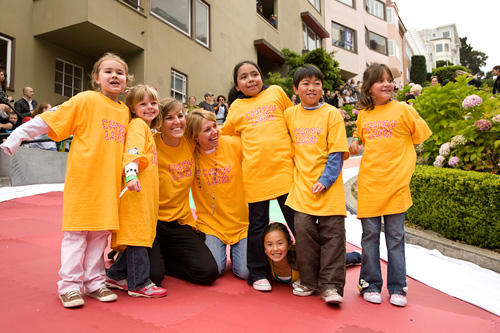 The four teams of six included a team assembled by staff in the Child Life Department at Children’s Hospital, and one organized by Family House, an independent nonprofit that provides temporary housing to families of seriously ill children undergoing treatment at UCSF.

Kelley O’Brien, director of special events and community relations for the UCSF Medical Center, said she couldn’t imagine a group of players better suited for the Candy Land celebration event: In the 1940s, Eleanor Abbott of San Diego designed the game while recovering from polio in hopes of creating a fun activity that other children—sick or healthy—could enjoy.

“There’s such a great story behind this game that we all played growing up,” O’Brien said as she watched the teams make their way from one giant colored square to the next. “And this is a wonderful opportunity for UCSF to partner with the local community on an event that brings so much joy to children.”

For those wondering if children in the digital era still play board games, the answer—at least when it comes to Candy Land—is a resounding “yes,” according to parents at the Hasbro event.

“Every few months or so, my kids ask me to get [Candy Land] down off of the closet shelf,” said Kim Ruiz, whose 8-year-old daughter Gillian Buckman, a kidney transplant patient, was part of the Children’s Hospital team. “They’re still not too old for it.”

The game’s lingering appeal was obvious on Aug. 19 as hundreds of area residents packed the sidewalks surrounding the festivities in order to catch a glimpse of the 575-foot stretch of colored blocks—designed to match the color sequence of the actual game—and the costumed characters of King Kandy, Princess Frostine and Lolly.

It took a small army of people six hours to assemble the more than 3,000 plastic mats in their carefully color-coordinated pattern, according to local radio personality Faith Alpher, who served as emcee at the one-of-a-kind birthday party. 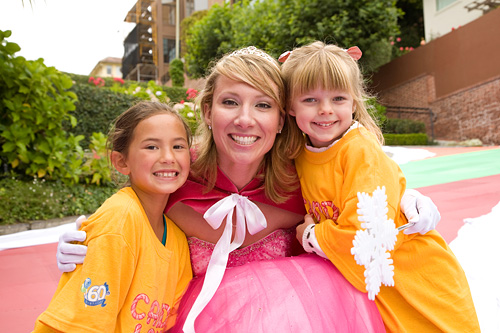 Kalia Firmage, 7, left, and Hannah Sumner, 5, from the UCSF Children’s Hospital team, pose with “Candy Land” character Lolly at the board game’s 60th anniversary party on Lombard Street on Aug. 19.

Though anyone lucky enough to play life-sized Candy Land can be considered a winner, the Children’s Hospital team took the title after a thrilling, come-from-behind victory.

At the finish line, a confetti-covered Gillian Buckman, the self-appointed team spokeswoman, offered her thoughts on the victory:

“Even if you’re last for a while, you might still win the game,” she said. “But it’s all just for fun.”

In addition, Hasbro has donated about 50 of its various games—including Clue, Scrabble and Monopoly—to both Children’s Hospital and Family House.