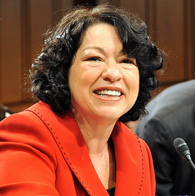 From an unpredictable path as a girl growing up in the housing projects in the Bronx to a judge in a federal appeals court, Sonia Sotomayor has achieved what no other Hispanic has in US history – rising to the pinnacle of the judicial system.

The Democratic-led Senate voted 68-31 on Thursday to confirm Sotomayor, who was born to Puerto Rican parents. She is expected to be sworn in as the third woman and the 111th person on the US Supreme Court on Saturday.

But the history-making confirmation came with conflict, dividing Democrats and Republicans mostly along party lines. As reported by CNN on Thursday, “Democrats continued to praise Sotomayor as a fair and impartial jurist with an extraordinary life story. Many Republicans continued to portray her as a judicial activist intent on reinterpreting the law to conform with her own liberal political beliefs.”

One of the biggest bones of contention was Sotomayor’s repeated references in speeches in which she made controversial statements, including her hope that a “wise Latina woman, with the richness of her experiences” would reach a better conclusion than a white man “who hasn’t lived that life.”

In his nomination of Sotomayor at the White House on May 26, President Barack Obama summed up the significance of her journey.

“Along the way, she’s faced down barriers, overcome the odds, lived out the American Dream that brought her parents here so long ago,” Obama said. “And even as she has accomplished so much in her life, she has never forgotten where she began, never lost touch with the community that supported her.

“What Sonia will bring to the court, then, is not only the knowledge and experience acquired over the course of a brilliant legal career, but the wisdom accumulated from an inspiring life’s journey.

What do you think?

Send your comments about the confirmation of Sotomayor to
Lisa Cisneros, UCSF Today editor.

“And when Sonia Sotomayor ascends those marble steps to assume her seat on the highest court of the land, America will have taken another important step towards realizing the ideal that is etched above its entrance: equal justice under the law.”

UCSF faculty, staff and students, some of whom identify themselves as Hispanic or Latino, were asked by email to express their thoughts on the historic confirmation of Sotomayor. Below are their comments.

“I am ecstatic about Judge Sotomayor’s appointment to the US Supreme Court. She brings an almost unprecedented wealth of legal knowledge and experience to her new position. Equally important to me, she also has a compelling life story that includes significant challenges and personal strength in dealing with adversity. We often talk about the importance of diversity and excellence on campus and in the community. The picture of President Obama introducing Judge Sotomayor as his new appointee at the White House spoke more than a thousand words! I am looking forward to all of the many important contributions she will make on the Supreme Court.”

“It is ironic that debates over Judge Sotomayor focused more upon what was perceived as ethnic pride of a wise woman, rather than the day-to-day realities faced by so many immigrants and first-generation Americans – an overwhelming sense of being an ‘imposter’ and having to constantly prove one’s worth – even by a judge who rose to such prominence.”

“The confirmation of Sotomayor to the US Supreme Court is an historic milestone for Latinos and the nation and is cause for celebration. However, let us not assume that her appointment resolves race/color issues in this country or that her confirmation will necessarily benefit Hispanics. It is a step in the right direction.”

“It’s unfortunate that Judge Sotomayor received so much push back for reaffirming that her background and ethnicity adds to her qualifications. However, the final decision is a proud moment and sends an encouraging message about the receptivity of diverse thoughts and opinions on the Supreme Court. I couldn’t be more please that the face of justice in the US is finally beginning to represent the population.”

“The life experiences and diversity that Judge Sotomayor brings to the Supreme Court will be outstanding for the United States. It is beneficial for our country to have her judicial skill and wisdom, combined with her life experiences as one of the voices of the Court. Let us celebrate and honor her as we continue working to nurture the diversity of UCSF.”

“The advancement of not only the Hispanic community, but of all minorities through the nomination of Judge Sonia Sotomayor is a phenomenal moment in our nation’s history. I am personally very proud to be living in a time where the rapid growth of minorities is taking place, especially in a government that should represent all people of the United States of America.”

“Judge Sotomayor’s confirmation is a watershed event, not only for Hispanics, but for anyone who believes that there is hope for the future, and that wisdom and justice are not the prerogative of a particular race, ethnicity or gender.”

“It’s about time! Judge Sotomayor’s story is truly inspirational and her election to the US supreme court marks the beginning of a new era of involvement of Latinos in the political realm. In a time when immigrants are been ostracized and seen as invaders, her election is long awaited. Our community is in great need of leaders to give voice to the voiceless, and I hope that she does become the advocate for the Latino community that she says she will.”

Sotomayor, a Trailblazer and a Dreamer
New York Times, May 26, 2009