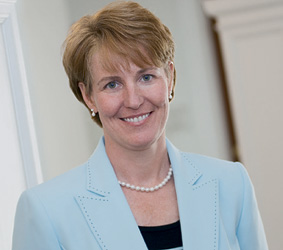 Moss, chairman of Institutional Relations and Development at the Cleveland Clinic, officially joins UCSF on October 1. She will report to the chancellor.

Moss will be responsible for fund-raising efforts that are vital to the future of UCSF.  In particular, UCSF is raising $600 million to build a new children’s, women’s specialty and cancer hospital complex adjacent to the Mission Bay biomedical campus. This is the first fundraising campaign ever for the UCSF Medical Center, consistently ranked one of the top 10 hospitals in the country.  UCSF is also launching a $150 million campaign to support a nationally preeminent program in integrated neurosciences research.

“Carol has both the depth and breadth of knowledge and experience that is critical to driving the philanthropic program at UCSF,” Desmond-Hellmann said.  “Carol’s track record speaks to her ability to galvanize an institution’s development efforts to ensure that its mission is broadly understood and widely supported.”

“As we cope with multi-million dollar budget reductions caused by the state’s budget crisis, it is imperative that we strengthen our development program so UCSF continues to excel at the leading edge of scientific discovery, patient care and graduate-level education in the life sciences and health professions,” Desmond-Hellmann said.

Development is a critical component of UCSF’s operations, with a majority of financial donations funding key research programs and academic positions. The Chronicle of Philanthropy ranks UCSF as one of the top fundraising organizations in the United States.  For six consecutive years, revenue from private support has surpassed the revenue UCSF receives from state appropriations.  In the fiscal year that ended June 30, UCSF received $300 million in private support and $243 million in state appropriations. During the same fiscal year, state appropriations totaled less than 8 percent of UCSF’s $3.1 billion operating budget.

Moss’ selection as the next development chief for UCSF follows an exhaustive national search. As vice chancellor, Moss will have oversight of 164 full-time equivalent positions and an operating budget of $24 million. Additionally, she will be vice president of the UCSF Foundation, which promotes the interests of UCSF and the UCSF Medical Center principally through fundraising efforts. The Foundation is governed by a 37-member Board of Directors, chaired by former Bank of America Chairman and CEO Richard Rosenberg, and consisting of some of the Bay Area’s top business and civic leaders. Moss’ responsibilities include overseeing the Foundation’s $440 million endowment.

While at the Cleveland Clinic, Moss is credited with many accomplishments, including involving more physicians and volunteers in philanthropic efforts, developing a highly focused donor-centered program, recruiting talented development professionals from across the country, and leading an effort to plan and execute the organization’s first billion dollar campaign.

Moss’ annual salary of $376,600 will be funded from sources other than state appropriations. By combining the duties of the associate vice chancellor with the development responsibilities of the senior vice chancellor, UCSF will achieve a net payroll savings.  The vice chancellor position is subject to the UC system-wide furlough plan adopted by the UC Regents in July and effective September 1.