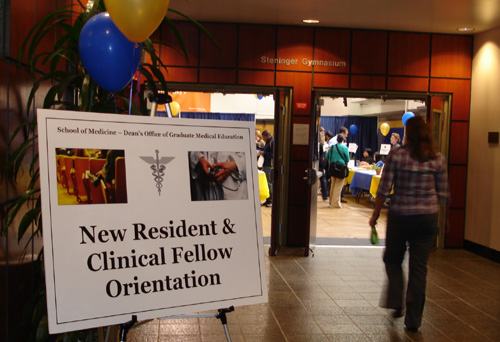 The UCSF School of Medicine hosted an orientation for more than 400 new residents and clinical fellows on June 30.

The UCSF School of Medicine held a daylong orientation event at the Parnassus campus to welcome more than 400 residents and fellows whom Robert Baron, MD, the associate dean for Graduate Medical Education, described as “outstanding” and “the very best from around the country.”

UCSF’s programs are consistently considered to be among the top programs in their fields, and are therefore extremely competitive when it comes to attracting talented young doctors and researchers, Baron noted.

This year’s new arrivals came from all backgrounds and were spread out among dozens of specialties, but they appeared united by the excitement of starting the next chapter of their lives at an institution known throughout the world for top-quality academics, biomedical research and clinical care.

“I always had a special interest in coming to UCSF,” said Nastaran Foyouzi, an incoming fellow in the Division of Reproductive Endocrinology and Infertility in the Department of Obstetrics, Gynecology and Reproductive Sciences. “I was praying that I matched here.”

Foyouzi, who moved from St. Louis, described herself as “a city person” and said she was excited to explore all that San Francisco had to offer. But sightseeing would have to wait: She was scheduled to start her fellowship at Mount Zion the day after orientation.

For new fellows  and newlyweds  Deepa and Cheerag Upadhyaya, San Francisco was both foreign and familiar at the same time: It was the scene of their engagement several years ago – the only other time they had set foot in the city before arriving to start their fellowships. 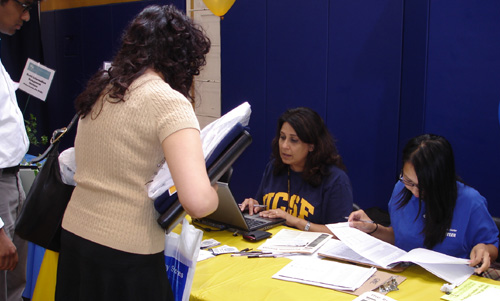 Hundreds of new UCSF residents and clinical fellows received information about housing, health care and a broad range of campus services at a June 30 orientation.

Cheerag Upadhyaya said he was initially attracted to UCSF because it is home to his mentor, spine surgeon Praveen Mummaneni, MD, who will supervise him for the next year in the Department of Neurological Surgery’s spine fellowship program.

Deepa Upadhyaya, a cardiology fellow, said the highly skilled UCSF faculty members in her chosen field were a huge draw for her as well.

Of course, it didn’t hurt that coming to UCSF afforded the young couple their first chance to live and work together since they got married 18 months ago. Before that, Deepa was based in Florida and Cheerag was in Michigan.

Many people at the June 30 orientation seemed understandably preoccupied with trying to process their new surroundings and make it through the first week. But some, like Hakeem Adeniyi Jr., were already thinking way ahead.

Adeniyi, an incoming resident in the Department of Family and Community Medicine, praised the program’s expertise in inpatient medicine and reputation as a leader in addressing the needs of the surrounding urban community.

“UCSF is very strong when it comes to serving the underserved and promoting diversity,” Adeniyi said. “I want to play a part in increasing the diversity in medicine.”