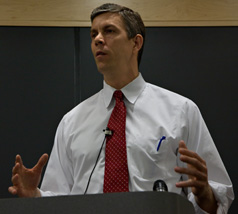 Three days after California voters rejected a ballot measure that would have restored $9.3 billion in funding for public schools, US Education Secretary Arne Duncan visited UCSF and other sites around San Francisco, calling for national education reform at every level, from preschool through graduate school.

Duncan, who appeared before an audience of educators and child advocates on May 22 at UCSF’s Mission Bay campus, said it was time “to push hard at every level of the education continuum.”

The University of California system alone faces a more than $530 million shortfall next year as a result of the failed ballot measures and decreased funding from a state facing a huge budget shortfall.

In California—once considered a national model for public education—school officials from K-12 to the University of California are decrying the state of public schools and universities, a situation made worse by the impact of the national economic downturn and the ongoing state budget crisis. In fact, California’s per-student spending ranks 47th in the country. The state would have to increase its spending by almost $2,400 per student—or 31 percent—simply to reach the national average, according to State Superintendent of Public Instruction Jack O’Connell.

Some financial relief is in sight. Duncan and his colleagues in Washington, DC, are in the midst of doling out $100 billion in education funding to states as part of the American Recovery and Reinvestment Act, the economic stimulus package approved in February.

California has already received about $4.3 billion in stimulus money to put toward education, and could receive billions more if state funding for education doesn’t drop too low, Duncan said.

He pointed to San Francisco as a city that has made real progress in education reform, and said he “couldn’t be more hopeful about the direction [the city is] going.”

Among other milestones, in 2005, San Francisco became the first city in California to commit local funds to universal preschool, and it was the highest-performing urban school district in the state in 2008.

Joseph Castro, PhD, UCSF’s vice provost of Student Academic Affairs, who helped organize Duncan’s visit to UCSF Mission Bay, said he was “encouraged by [Duncan’s] bold plans for improving education. This unprecedented level of investment will help to reduce the achievement gap in K-12 schools and provide more opportunities for students from all backgrounds to achieve their college and career aspirations.”

For more than 20 years, UCSF has partnered with the San Francisco Unified School District (SFUSD) with that same goal in mind, Castro noted. The joint program “I’m Going to College,” for example, exposes underserved elementary school students to health careers and helps them make the connection between attending college and becoming health care professionals.

And the Science & Health Education Partnership (SEP), founded in 1987 at UCSF, is nationally recognized as a model partnership between a university and a local public school system. Each year, more than 400 SFUSD K-12 teachers and their students  representing 80 percent to 90 percent of SFUSD’s schools  participate in SEP programs. 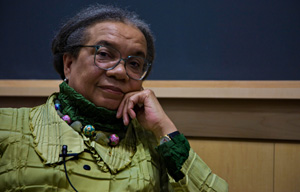 Marian Wright Edelman, a renowned activist for the rights of children and president and founder of the Children’s Defense Fund, answers questions from the audience at an education conference at UCSF Mission Bay.

Plans are underway to further enhance partnerships between SFUSD and UCSF. Castro said he believes such programs are well positioned to compete for federal stimulus funds.

While visiting UCSF, Duncan was joined by Marian Wright Edelman, president of the Children’s Defense Fund, who said education policy should be like “good parenting” and called for a system in which children are viewed as precious resources.

“We are going backwards,” Edelman said of education in America, warning that the cradle-to-college pipeline increasingly is being replaced by the “cradle-to-prison” pipeline.

Edelman expressed some optimism about the stimulus plan’s promised support for education, and said educators and child advocacy groups would have to “get creative” to maximize the benefit of those funds.

“This is both the worst and the best of times, to borrow a phrase from Dickens,” she said.

Much of the May 22 discussion centered on K-12 education, but Duncan stressed the importance of investing in higher education as well.

“High school is not enough,” he said. “We have to think beyond that.”

President Barack Obama has pledged to increase college financial aid and to work to make the United States the world leader in the proportion of college graduates by 2020.