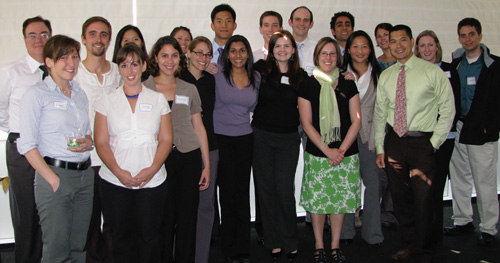 A group of 20 UCSF students participating in an intensive clinical research fellowship program gathered recently to present the results of their hard work, exploring topics as varied as erectile dysfunction, depression and a type of fungal infection that can cause blindness.

The students were all participants in UCSF’s Pathways to Careers in Clinical and Translational Research (PACCTR) program, part of the cross-campus Clinical and Translational Science Institute (CTSI). The eight-year-old PACCTR supports clinical research training for predoctoral students in the form of short-term fellowships lasting several months and longer-term fellowships lasting one or two years. Each student is paired with a UCSF faculty mentor with expertise in his or her chosen field of research.

“This program is really about role modeling and mentorship,” said program director Joel Palefsky, MD, professor of medicine and associate dean for clinical and translational research. “When it started, the pipeline of clinical and translational researchers had dried up. [With this effort,] we’re focusing on taking discoveries and moving them into the arena where they become helpful to people.”

Tackling health threats and improving quality of life were clearly goals that this year’s researchers had in mind when selecting their projects, which they presented May 19 at a symposium in Millberry Union.

PACCTR fellow Dana Clutter, for example, focused her research on gaining a better understanding of the high mortality rates among AIDS patients in Africa within the first year of initiating antiretroviral therapy (ART). Currently, early mortality rates among that group of patients range from 8 percent to 26 percent, while the rate is less than 2 percent in the United States, she said.

Clutter surmised that undiagnosed disease is both highly prevalent and an important predictor of early mortality in AIDS patients undergoing ART. She decided to test out that theory in a group of 130 patients with AIDS-related Kaposi’s sarcoma  a type of cancer  who were being evaluated for ART in Kampala, Uganda.

As part of their standard evaluation, patients underwent a chest X-ray, the vast majority of which turned out to be abnormal. Most surprising to Clutter and her mentor, Jeff Martin, MD, MPH, was the fact that 53 percent of patients who were asymptomatic when they arrived at the clinic produced abnormal X-ray results.

“What this shows is that among individuals who are reporting no symptoms, if you take the extra step and do an X-ray, you’ll find that in a substantial number of cases they do have abnormalities,” said Martin, associate professor in the Department of Epidemiology and Biostatistics.

The PACCTR symposium occurred just a few days after another on-campus event highlighting the research accomplishments of fellows and faculty within the UCSF Department of Pediatrics.

Pediatrics Research Day, which took place on May 15, featured presentations on type 1 diabetes, increasing physical activity among youths, and other pressing issues in the field of pediatric research and care.

“This is a way of highlighting the exciting research of our fellows and early and new faculty,” said Mary-Ann Shafer, MD, professor and vice chair of faculty development in the Department of Pediatrics and associate director for training of the Division of Adolescent Medicine.

Shafer is also the director of UCSF’s Pediatrics Fellows’ College, a first-of-its-kind professional development program. By addressing the development of executive and leadership skills, the program aims to provide all departmental academic fellows with guidance and mentorship  both during their fellowship years and as they transition into their early careers in medicine and academia.

Fellows play an integral role at UCSF, but they are often very isolated, Shafer said. Events like Pediatrics Research Day  in conjunction with the half-day workshops held every quarter at the Fellows’ College  are a way of promoting interaction across various levels of the department and the University, and of encouraging the research efforts that are so essential to advancing health and young careers, she said.

“At UCSF, we’re all about training really good doctors, exposing them to academics, and getting our fellows, students and residents excited about research,” she said. “Instead of a fractionated approach, we want to engage with them really early  as early as high school  and give them consistent boosts along the way to promote their interest in science and research. We want to keep that fire going in their bellies.”

The results indicate that a simple diagnostic procedure could go a long way toward improving mortality, Clutter said. “X-ray screening could identify a subset of patients with potentially treatable conditions that would otherwise go undetected,” she said.

While Clutter traveled halfway around the world to conduct her research, William Collins chose to make use of UCSF’s own extensive lab resources to study a new type of stem cell technology, induced pluripotent stem (iPS) cells.

These cells, derived from human skin cells, can be turned into any type of cell in the body. In addition, iPS cells’ DNA matches that of the individual who provided the skin cells  a key characteristic if the cells are eventually to be used to replace that individual’s destroyed or damaged tissue.

Collins’ research was based on the premise that if scientists could develop iPS cells from frozen tissue biopsies, they could potentially create and then store patient-specific iPS cells for future use.

“The significance of Will’s work is that we now have a method to prospectively bank tissue for future development of iPS cells as genetic variation is discovered from samples derived from parallel DNA banks of the same patients,” said Deepak Srivastava, MD, UCSF professor and director of the UCSF-affiliated Gladstone Institute of Cardiovascular Disease, who served as Collins’ mentor.

Srivastava, a first-time PACCTR mentor, called the program “wonderful. It is a critical program to attract medical students into academic medicine,” he said. “It helps them develop the appropriate credentials and experience to compete for the few residency and fellowship programs that are positioned to train true academic physicians.”

“This is one of the best things the University does,” Martin added. “Virtually every student who presents a solid research proposal is able to be funded. I don’t know too many other medical schools that can say that.”

This year, the program included 20 one- and two-year fellows and 14 short-term fellows, and Palefsky said he hoped the experience would influence the students as they contemplate their futures in science and medicine.

“Our goal is to engage students, so they continue on this journey after graduating,” he said.

Preliminary surveys of PACCTR alumni point to success in that mission, Palefsky said. In a recent survey of participants from the first five years of the program, 95 percent said they remain interested in a career in clinical and translational research.

The CTSI was established in 2006 through a National Institutes of Health (NIH) Clinical and Translational Science Award of more than $100 million over a five-year period. Its goal is to accelerate the pace at which scientific discovery is translated into patient care. The PACCTR fellowships are funded in part by the NIH award, and in part by the UCSF School of Medicine and the New York-based Doris Duke Charitable Foundation.