To promote awareness about the health hazards of tobacco, UCSF will bring together its own faculty experts, staff and students to recognize World No Tobacco Day on Friday, May 29.

The campus community is invited to attend UCSF’s World No Tobacco Day event, from noon to 1 p.m., in Health Sciences West, room 301, on the Parnassus campus.

“UCSF’s World No Tobacco Day demonstrates the principle of thinking globally and acting locally,” says Stanton A. Glantz, PhD, director of the UCSF Center for Tobacco Control Research and Education. “At the same time that we are advocating for global policy change on smoking in the movies to reduce the millions of kids who start smoking every year, we are working to educate clinicians to do a better job of identifying and treating smokers and offering UCSF employees assistance in quitting.”

Tobacco addiction causes 438,000 deaths in the United States each year, making it the leading preventable cause of death. In addition, some 8.6 million Americans live with serious smoking-related illness.

The theme of World No Tobacco Day 2009 is “Tobacco Health Warnings,” with an emphasis on the picture warnings that have been shown to be particularly effective at making people aware of the health risks of tobacco use and convincing them to quit. More and more countries are fighting back against the epidemic of tobacco by requiring that packages of tobacco show the dangers of the product’s use, as called for in guidelines to the World Health Organization’s Framework Convention on Tobacco Control. 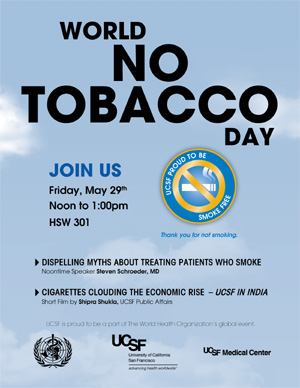 At World No Tobacco Day at UCSF, Steven A. Schroeder, MD, director of the Smoking Cessation Leadership Center, will deliver a talk titled “Dispelling Myths About Treating Patients Who Smoke.”

For the past 40 years, Schroeder, Distinguished Professor in Health and Health Care, has worked to engage the medical community in helping people kick the nicotine habit. Last November, the Association of American Medical Colleges (AAMC) presented Schroeder with the David E. Rogers Award, which recognizes a medical school faculty member “who has made major contributions to improving the health and health care of the American people.”

Lisa Cisneros, assistant director of UCSF Public Affairs, will introduce the premiere of a new short film titled, “UCSF in India: Cigarettes Clouding the Economic Rise.” The film depicts the growing use of tobacco in India and the ongoing collaborations of UCSF faculty and their colleagues in India to regulate its use. The film is produced and directed by Shipra Shukla, who ventured to India last summer to report on tobacco use among India’s young professionals and what health experts in UCSF and India are doing to diminish the threat.

“This film is one in a three-part series that focuses on how UCSF is fulfilling its advancing health worldwide mission through ongoing research and educational collaborations in India,” Cisneros says. “The tobacco film and the two others that will debut this year document how UCSF is partnering with individuals and institutions around the world to respond to local and global health problems.”

Glantz is featured in the UCSF tobacco film and will serve as moderator for the event. In the film, Glantz talks about his educational campaign, www.SmokeFreeMovies.ucsf.edu, calling attention to smoking in the movies, both in Bollywood and Hollywood and promoting policies—including an R rating for smoking – designed to reduce the millions of children that movies recruit for Big Tobacco every year.

Last March, the American Cancer Society named Glantz, professor of medicine, as the lead recipient of the 2009 Luther L. Terry Awards for Exemplary Leadership in Tobacco Control.  The award recognizes Glantz as one of the world’s outstanding tobacco control advocates and researchers, who has pushed the field of tobacco control in new directions.

Information tables and a trailer of the video will be at the Medical Sciences Building lobby from 8 to 10:30 a.m. and in the Health Sciences West lobby from 11:30 a.m. to 1 p.m.

For information about the event, please contact Karen Williams, Center for Tobacco Control Research and Education, at 415/476-4683 .