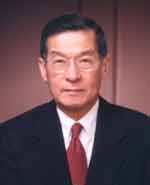 Yuet Wai Kan, MD, DSc, an internationally recognized leader in the field of human genetics, was honored Thursday (July 20) with a Lifetime Achievement Award by the Society of Chinese Bioscientists in America.  It is the first time the award has been presented.

Kan is the Louis K. Diamond Professor of Hematology at UCSF.

The Lifetime Achievement Award from the Society of Chinese Bioscientists in America (SCBA) was presented to Kan during the group’s 11th International Symposium, held this week in San Francisco. The professional society aims to promote bioscience research and medical knowledge and promote international cooperation.

A recipient of many high honors, Kan received the prestigious Shaw Prize in Life Science and Medicine in 2004, an international award given by the Shaw Prize Foundation based in Hong Kong that recognizes breakthroughs in scientific research resulting in “a positive and profound impact on mankind.”  He was honored in 1991 with the distinguished Albert Lasker Clinical Medical Research Award, the nation’s most prestigious honor in the clinical research field.

Kan is a member of the National Academy of Sciences. His research is currently focused on the use of gene therapy to treat sickle cell anemia and thalassemia. His aim is to develop cell therapy on patient-specific embryonic stem cell lines, transplanting the treated cells into patients to treat their disease. His team is carrying out research in a mouse model of sickle cell anemia in which animals have been genetically engineered to harbor a human gene that causes the disease.

He has served as president of the American Society of Hematology and was a member of the President’s Committee on the National Medal of Science.